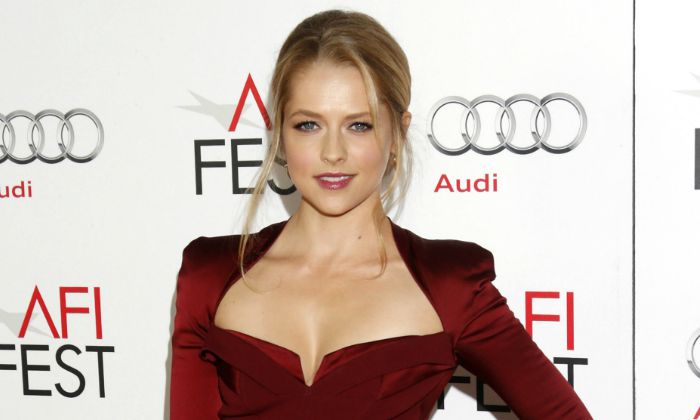 Teresa Palmer is an Australian actress and model who is most widely recognized for her work in hit movies such as Warm Bodies, Lights Out and Hacksaw Ridge. She received nomination for the Australian Film Institute Award for Best Lead Actress for her stellar performance in the movie 2:37. She also starred in movies I Am Number Four, Bedtime Stories, The Grudge 2 and The Sorcerer’s Apprentice.

Palmerwas born to Australian parents Paula Sanders, an investor and Kevin Palmer, who was a missionary and former nurse. She was raised by her mother after they divorced when she was three years old.

After spending a few years with her mother, she began to live with her father on his farm in the Adelaide Hills. She has two half sisters and two stepbrothers from her father’s remarriage to Karen Palmer.

Palmer graduated from Mercedes College, a private Catholic day school, in Springfield, Adelaide in 2003. She was accepted into a university to study teaching and was taking a course on journalism, but she dropped out to pursue an acting career.

Teresa Palmer is married to actor/director Mark Webber since 21 December 2013. The couple has three children – Bodhi Rain Palmer (b. February 17, 2014), Forest Sage Palmer (b. December 12, 2016), and Poet Lake Palmer (b. April 12, 2019). She also has a step-son, Isaac Love, from her husband’s previous relationship with actress Frankie Shaw. In February 2021, Palmer announced that she is expecting her fourth child, a girl, with her husband Webber by posting a photo of her baby bump on Instagram.

She got her break in 2006 when she was cast as Melody, a high school student who is driven to suicidal tendencies, in the movie 2:37. For her work, she was nominated for the Australian Film Institute Award for Best Lead Actress.

In 2018, she was picked to play the lead role of Diana Bishop in the Sky One television series A Discovery of Witches.

In her early career, Palmer appeared in various TV adverts and also modeled for fashion and beauty brands.

In a career spanning more than thirteen years, Palmer has grown to an established actress from appearing as an extra. She has accumulated a net worth of $3 million.

She did a slew of odd jobs before becoming an actress, including working as an attendant in a fast food joint, in clothing retailers, and appearing in television adverts.

Her first acting job was dressing up as Strawberry Shortcake and Santa’s Little Helper on weekends for promotions in shopping centers near Adelaide.

She was discovered at the age of 18 years old by a talent scout and was cast in Murali K. Thalluri’s independent film 2:37. She was picked for the role without an audition and without prior acting experience.

In 2015, she won the Rising Star award at the Maui Film Festival.

She is an avid football fan and a number one ticker holder of the Port Adelaide Football Club.

Teresa was considered for the role of Gwen Stacy in The Amazing Spider-Man (2012) but Emma Stone was cast instead.

She also runs her own health and wellness websites called ‘Your Zen Life’ and ‘Your Zen Mama’ with Australian actress and model Phoebe Tonkin and American actress Sara Wright respectively.

Plamer had three pet kangaroos named Charlie, Radar and Tippi at her home in Australia.

Canadian actress Vanessa Lengies was supposed to play Vanessa in The Grudge 2 (2006), which was originally written for her. It was later played by Palmer after Lengies turned it down due to scheduling conflicts.

Palmer was originally considered for the role of “O” in the 2012 movie Savages which later went to Blake Lively.