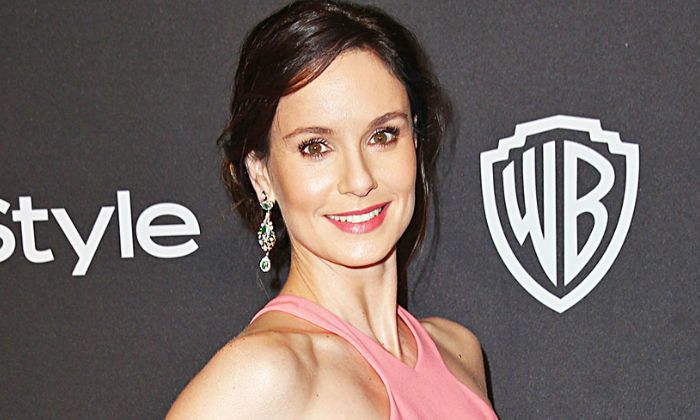 Sarah Wayne Callies is an American actress from La Grange, Illinois, who shot to prominence for her role as Sara Tancredi in Fox’s critically acclaimed series ‘Prison Break’. Her stunning performance in the series gained her a major role on the AMC horror/drama series, ‘The Walking Dead’, which helped establish her name in the international market. Her portrayal of Lori Grimes in the series earned her the Satellite Award for Best Cast – Television Series in 2012.

In addition to her successful television roles, she also starred in a handful of movies including ‘The Celestine Prophecy, ‘Lullaby for Pi’, ‘Black Gold’, ‘Black November’, ‘Into the Storm’ and ‘The Other Side of the Door’, among many others. In 2019, Sarah was cast in the starring role of Margaret Sanders in the eight-part miniseries, ‘Unspeakable’.

Sarah Wayne Callies was born on the 1st of June 1977, in La Grange, Illinois, United States of America. She is currently 44 years old.

Sarah Wayne Callies is the only daughter to parents Valerie Wayne, an English professor and David E. Callies, a Law professor, both worked at the University of Hawaii, Manoa. Her father is of German and Czech descent and her mother is of half Hungarian Jewish descent, and also has German roots.

Callies graduated from the independent Punahou School, located in Honolulu, Hawaii in 1995. She then attended Dartmouth College in Hanover, New Hampshire and obtained her Master of Fine Arts degree from the National Theatre Conservatory in 2002. She was actively involved in theatre and performed in a number of stage plays throughout her early life.

Sarah married her husband Josh Winterhalt, a mixed martial artist and martial arts instructor, on July 21, 2002. Both knew each other ever since they studied together at the Dartmouth College in Hanover.

The couple welcomed their first child, a daughter named Keala Wayne Winterhalt on July 20, 2007. In addition, they also have a son named Oakes Wayne Winterhalt (adopted), born in August 2013.

After several guest appearances on television shows, Callies finally landed a significant role in Armand Mastroianni’s drama movie, ‘The Celestine Prophecy’ in 2006. She played the role of Marjorie starring alongside actors Matthew Settle and Thomas Kretschmann. Despite being a film adaptation of James Redfield’s best-selling novel of the same name, the film was a box-office disaster and grossed only $1.5 million.

Sarah made her television debut on an episode of the comedy-drama series, Queens Supreme, in 2003.

Her roles in the hit television shows ‘Prison Break’ and ‘The Walking Dead’ can be easily categorized as her best works in her acting career. She received critical acclaim for her performances in the series that eventually boosted her acting career.

As of 2022, Sarah’s net worth is estimated to be $3 million. Her impressive wealth is the result of her appearances in hit television shows and high-grossing movies. She lives with her family in a beautiful mansion her family in British Columbia, Canada. However, she jiggles between Canada and Los Angeles due to acting schedules.

Her parents moved to Honolulu, Hawaii when she was just a year old kid.

As a child, she decided not to follow in the footsteps of her parents, who were college professors and rather developed a liking for acting and appeared in many high school productions.

Sarah honed her acting skills at the National Theatre Conservatory in Denver and obtained an MFA in 2002.

After graduation, she moved to New York City right way and have several auditions before landing a part in the short-lived CBS show Queens Supreme.

She is close friends with her Prison Break co-star, Wentworth Miller.

She likes dancing the Argentine tango and has taken up low-flying trapeze.

Sarah was included in The Maxim magazine’s “The Hottest Women of Fall TV 2008” list.

She and actress Danielle Harris were born on the same day, 1st June 1977.