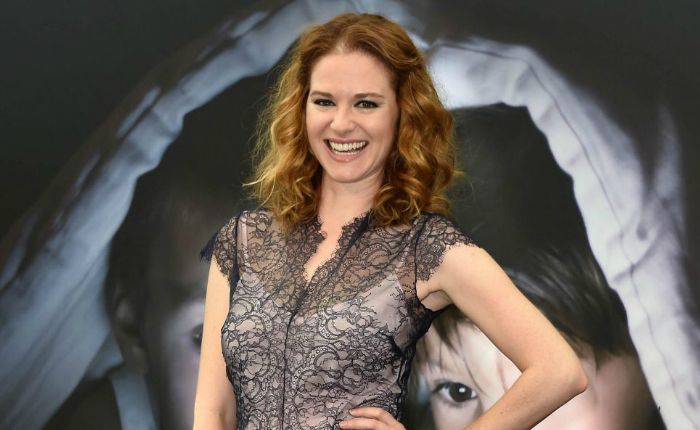 She is currently 38 years old.

Sarah was educated at The Stony Brook School and the Ward Melville High School in Setauket, New York. After graduating from high school, she was accepted into the University of Virginia, from where she obtained her bachelor’s degree in drama in 2002.

Sarah is the daughter of Dr. Jeannie Drew, a teacher who works at an independent private school for girls in Manhattan and Rev. Charles Drew, who is the senior pastor at Emmanuel Presbyterian Church in New York City. She has a brother named Allen Drew, who is also a pastor at Mt. Airy Community Church in Philadelphia as well as the director of an a cappella group at Germantown Friends School. Actor Ben McKenzie is her cousin, who is best known for his work in The O.C. and Gotham.

Sarah Drew is married to Peter Lanfer, a lecturer at UCLA, since June 2002. They started dating in early 2002 after they worked together in a camp and they got hitched together after few months of relationship. The lovely couple have two children, a son, Micah Emmanuel (born on January 18, 2012) and a daughter, Hannah Mali Rose (born on December 3, 2014).

Sarah had her professional stage debut in Romeo and Juliet
as Juliet at the McCarter Theatre in Princeton, New Jersey in 2001.

In 2003, she had her first Broadway appearance in Vincent in Brixton, and later moved to London’s West End.

Though, Sarah has appeared in a number of films since her inception into acting, she is widely known for her roles in the television circuit. She got her big break in 2004 when she was cast in The WB drama TV series ‘Everwood’, playing the role of Hannah Rogers. Her performance in the series garnered praise and appreciation as well as fetched her versatile roles in TV shows.

In 2009, she landed a recurring role of Dr. April Kepner in the sixth season of ABC’s acclaimed medical drama series, Grey’s Anatomy. The likeness of the character among the audience promoted her to a series regular for the seventh season and continued to be a part of the show until 14th season. She quit the show in March 2018.

Sarah’s net worth is estimated to be $3 million, according to celebrity net worth. Having said that, she made most of her wealth from a successful acting career.

Talking about her lifestyle, she lives with her family in a 1926 Tudor style home in Glendale, California. They bought this amazing house for around $900,000 in 2006 that boasts three bedrooms, two baths, a heated swimming pool & spa, Batchelder tile fireplace and including a detached guest unit. She’s spotted driving her Toyota Sienna on numerous occasion.

She developed liking for acting at a very young age and appeared in school productions as well as actively involved in community theater with Take One Theatre Arts and summer stock.

Sarah began her professional career while still in high school. She got a voice role offer on the animated series Daria in 1997.

In an interview, Sarah revealed that heels make her feel sexy. She only wear heels on special occasions and she mostly wear shoes from ShoeDazzle, price ranging around 40 bucks.

One of her beauty secrets is that she always wear sunblock.

Some of her commercially successful movies are Radio, Moms’ Night Out and American Pastime.

In 2018, Sarah starred as Christine Cagney in a reboot pilot of the 1980s hit show ‘Cagney & Lacey’. Television network CBS passed the pilot in May 2018.