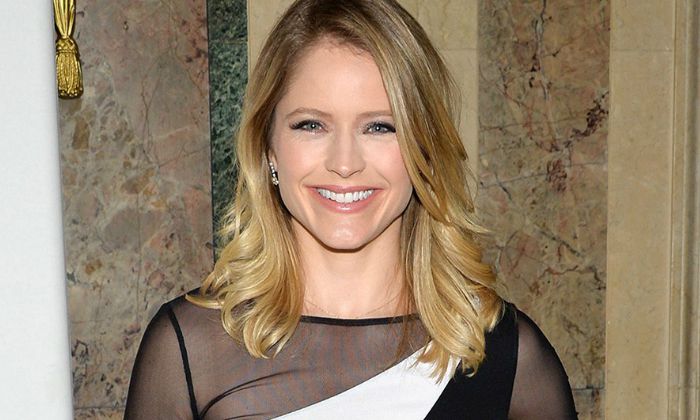 Sara Haines is a well-known American journalist and television host, who came into the limelight as a lifestyle anchor for Good Morning America. She worked as a correspondent on NBC The Today Show before joining the new correspondent for ABC News in 2013. Sara gained immense popularity for her work as a co-host of ABC’s The View. She currently co-hosts Strahan and Sara, a part of ABC’s Good Morning America, alongside former NFL player Michael Strahan.

Sara Haines was born on the 18th of September 1977, in Newton, Iowa, United States of America. She is currently 44 years old.

Talking about Sara’s early life, she was born third of four children to American parents, Dick Haines and Sandy Haines. She has three siblings, two older sisters and a younger brother, whose names and professions are unknown. She grew up in Newton, Iowa, along with her siblings.

Sara completed her school education in her hometown. She then attended Smith College in Northampton, Massachusetts from where she graduated with a Bachelor of Arts degree in Government in 2000. She was good at sports in school as well as college, where she played basketball and volleyball.

Speaking about her love life, Sara Haines has been romantically linked up with two men in the past before marrying her husband Max Shifrin. One in her twenties and the other in her early thirties. She dated a homicide detective from New York, who was 18 years older than her, but this relationship didn’t last longer than four years.

One of the reasons why she loved him is that he had a kid and she was fond of kids. But unfortunately, things didn’t go well between them and they ended their romantic affair. There’s no accurate information about her second relationship.

Sara met her husband Max Shifrin, a lawyer, on the dating site called OkCupid. In fact, she was asked to create an account on the dating site by one of her producers of Today for a segment of the show. Despite the producers of the show asked her to delete the account after the show, she insisted on keeping it going. Max, who is five years younger than her, got interested in her profile and they soon started communicating with each other on mutual interests.

They began dating in early 2014 and married on the 22nd of November of that year in The Bahamas. Sara welcomed her first child with her husband, a son named Alec Richard Shifrin on March 5, 2016. She gave birth to their second child, a daughter, Sandra Grace Shifrin, on December 23, 2017. In January of 2019, Sara and Max announced that they are expecting their third child, a son, due in July. She gave birth to their second son, Caleb Joseph, on June 26, 2019.

Sara Haines is one of the most successful television hosts in the industry and has been a familiar face among audiences. As for her physical statistics, She has a perfect curvaceous body that complements her height and weight. Check out her body attributes:

After graduating from college, Sara Haines started her career with the NBC Page Program as a paid fellowship. She became a production coordinator for the network’s hit show, Today, after ten months into the NBC PP program. In 2009, she was promoted as correspondent of the show, serving as the fourth-hour contributor for Today Show until her departure in 2013. She joined ABC in the same year, where she worked as a News correspondent as well as hosted the weekend editions of Good Morning America. It was her biggest breakthrough in her career as every journalist’s dream would be scoring a job in America’s biggest television network.

Like many other journalists, her ultimate dream was to have her own show or to host a show similar to The View. Her dream came true in 2016 when she was promoted to be one of the co-hosts on The View. She was with the show for two years until July 2018 and later joined Good morning America Day, where she co-hosts the third hour of the show called Strahan and Sara, alongside Michael Strahan.

As of 2022, Sara Haines has an estimated net worth of $6 million. There’s no information about her salary available at the moment. Sara lives with her family in Brooklyn.

She was raised in her hometown along with her siblings.

She has two chihuahuas as pets.

Haines was nominated for a Daytime Emmy Award for Outstanding Entertainment Talk Show Host for her work in the show, The View, in 2017 and 2018, respectively.