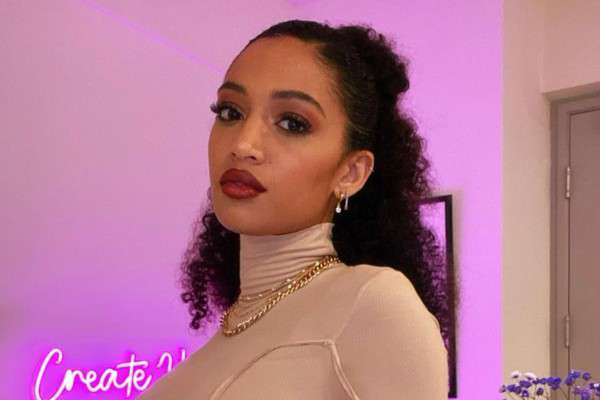 Samantha Logan is an American actress who became known to the world for her recurring role as Nina Jones in the hit Netflix series 13 Reasons Why among others. She is also most famously known for playing Olivia Baker in The CW series All American and Tia Stephens in the Freeform series The Fosters.

In a career spanning more than a decade, the young beautiful actress has starred in several lauded projects apart from the above-mentioned titles, including the likes of Teen Wolf, Melissa & Joey, General Hospital, and 666 Park Avenue. Samantha comes from a mixed ethnicity family with Irish and Trinidadian roots.

Aside from acting, the actress is known for her relationship with her longtime boyfriend Dylan Sprayberry. Samantha Logan’s net worth, as of 2023, is estimated to be about $2 million.

Born and raised in Boston, Massachusetts, Samantha Logan age is currently 24 years old. She was born in the year 1996 and celebrates her birthday on October 27, which makes her a Scorpion.

Find out what famous people were born on October 27 and discover who shares their birthday with Samantha.

Talking about Samantha’s early life, very little is known about her family, parents and childhood at the moment. She was raised by her mother Colleen Logan along with his older brother. Her father is Trinidadian while her mother is got Irish roots. They separated when she was a little girl.

Logan went to the Professional Performing Arts School and later enrolled herself into the prestigious Fiorello H. LaGuardia High School of Music & Art and Performing Arts where she studied drama and theatre.

Who is Samantha Logan dating?

Samantha is very open when it comes to her romantic life. She is in a relationship with her longtime boyfriend Dylan Sprayberry who also turned out to be an actor. The pair began dating back in 2017 and often share their pictures snapped on various occasions on Instagram.

The actress is very fond of tattoos. She has got at least four tattoos as we know of – a tattoo with planet Earth on her left ankle; a four-leaf clover behind her ear; a hibiscus flower on her wrist; and a roman letter “X” on her wrist.

In addition to tattoos, she has three ear piercings.

Samantha Logan took an early interest in acting and persuaded her mother to move out of their hometown to Manhattan in New York for better opportunities. Soon after relocating there, she started auditioning for both films and television series.

She ended up booking modeling gigs and television commercials and even starred in some local plays in community theatre. Logan made her acting debut at age 13, playing Little Girl #2 in the popular TV series Gossip Girl.

Later on, she was cast in various roles in films and television series such as Detachment, Law & Order: Special Victims Unit, 666 Park Avenue, General Hospital, Teen Wolf, and The Fosters.

She became a household name when she took on the recurring role of Nina Jones in the critically acclaimed and popular Netflix series 13 Reasons Why. She appeared in 13 episodes of the second season of the series where she starred alongside the likes of Dylan Minnette, Katherine Langford, and Christian Navarro.

Well, this is the most important topic that most of you are apparently looking for. It is a well-known fact that people in the film and television industry, especially actors, make a lot of money from their on-screen appearances. Samnatha is no exception to that.

She is close friends with actress Anne Winters.

She is a trained dancer and has worked with choreographers like Mia Michaels, Brian Friedman, Laurieann Gibson and Dave Scott.

Logan is active with several local charities and has associated herself with charities like 5acres and IVHQ.