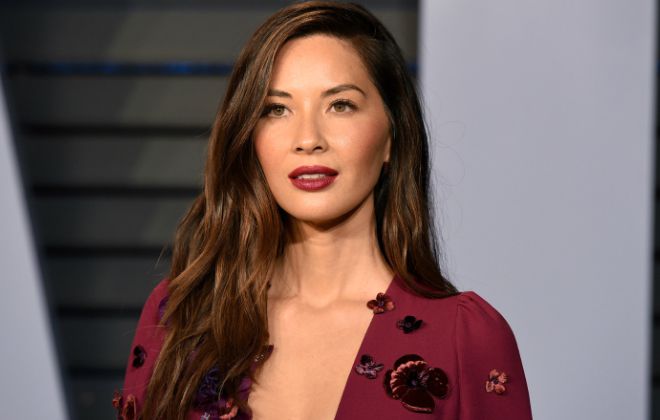 Olivia Munn is an American actress and fashion model who started her career in television journalism before making the leap to mainstream cinema. She first gained fame as a co-host of G4’s cutting-edge tech-news series Attack of the Show and worked as a correspondent on The Daily Show.

Munn landed gigs as a host and small parts in television and she catapulted to fame when she was cast to star in the TV series The Newsroom. She has starred in many films, including Magic Mike, Deliver Us from Evil, and X-Men: Apocalypse.

Olivia Munn was born on the 3rd of July 1980, in Oklahoma City, Oklahoma, United States of America. She is currently 41 years old.

Olivia Munn is the daughter of Winston Barrett Munn and Kim Schmid. She is of American, English, Irish and German ancestry on her father’s side and her mother has Chinese descent, born and raised in Vietnam. Munn has two brothers, John, a physicist, and James, a custom motorcycle shop owner. She also has a sister named Sara, who is a lawyer.

Her parents divorced when she was two years old and her mother eventually remarried to a member of the United States Air Force.

After graduating, she got enrolled at the University of Oklahoma where she majored in journalism and minored in Japanese and dramatic arts. She was an intern at the NBC affiliate in Tulsa.

Throughout her acting career, Olivia Munn has been linked to several high-profile relationships and often makes it to the headlines of media outlets. There have been a lot of rumors and gossips surrounding her romantic life.

She has been romantically linked to actors Jamie Foxx, Chris Pine, Matthew Morrison, and Joel Kinnaman before she began dating American football quarterback, Aaron Rodgers in 2014. They both split in April 2017 after being together for three years. She then briefly dated Tucker Roberts, the son of Comcast CEO Brian Roberts.

She is rumored to be dating comedian John Mulaney since May 2021.

Olivia Munn made her first television appearance as a co-host on G4’s cutting-edge tech-news series Attack of the Show in 2006.

That same year, she landed her first acting gig as Miley Acuna in the TV drama series Beyond the Break.

From 2012 to 2011, she worked as a correspondent on Comedy Central’s The Daily Show and then played Leigh in the NBC comedy TV series Perfect Couples.

She began playing Sloan Sabbith on HBO political drama series The Newsroom in 2012 until 2014. For her work in the series, she received positive reviews from critics.

In 2018, she appeared as a celebrity judge on America’s Got Talent.

During her time as a fashion model, Munn has appeared in a number of advertising campaigns and television commercials for Nike, Pepsi, McDonald’s, Neutrogena, and others.

Over the years, Olivia Munn has accumulated a net worth of $25 million. She owns houses in Los Angeles and New York. She splits her time between the two places due to the nature of her work.

The sparkling beauty has over 2.7 million followers on Instagram.

Her parents divorced when she was young and her mother remarried a man who enlisted in the Air Force. She spent most of her youth in Japan, where her stepfather was stationed.

After graduating, she entered the Japanese fashion industry and later returned to America to try her luck in the entertainment industry.

She started her career by appearing in commercials and began working as a sidelines reporter/interviewer for women’s college basketball and football teams for Fox Sports.

She participated in a world championship rock, paper, scissors tournament.

She is good friends with Seth Meyers.

Olivia released her book titled “Suck It, Wonder Woman: The Misadventures of a Hollywood Geek” on July 2, 2010.

In 2007, she appeared as “Babe of the Month” in a non-nude pictorial in Playboy magazine.

She holds a black belt in taekwondo.

In November 2017, Munn accused film director Brett Ratner of repeatedly sexually harassing her over a period of several years.