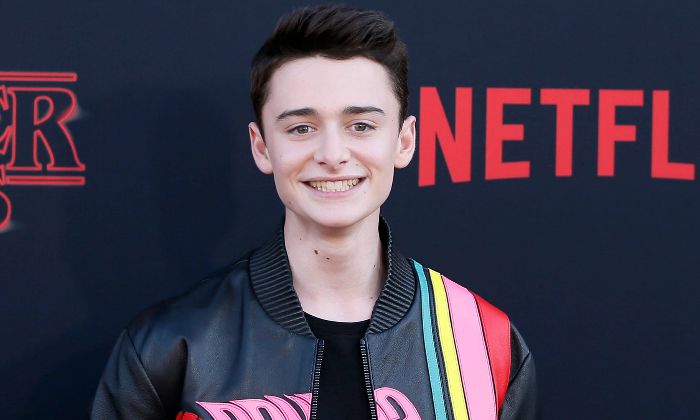 Noah Schnapp is a New York-born actor who first came into public attention for his role as Will Byers in the Netflix science fiction-horror web television series Stranger Things. He joined the series’ first season as a recurring cast and went on to become a series regular in its second season. He won several awards for his stellar performance in the series including Screen Actors Guild Awards and Teen Choice Awards. Besides this breakthrough role, Noah’s other acting works include Steven Spielberg’s historical drama film Bridge of Spies and the web series Liza on Demand. In addition, Noah voiced the character of Charlie Brown in the Fox feature film Peanuts.

Noah Schnapp was born on the 3rd of October 2004, in Scarsdale, a small town in Westchester County, New York, United States of America. He is currently 18 years old.

Noah Schnapp is currently single. He is reluctant to discuss his relationship status with the media. He has kept that aspect of his personal life away from the media. Furthermore, Noah is currently focusing on his career.

Noah Schnapp made his feature film debut as Roger Donovan in Steven Spielberg’s historical drama film, Bridge of Spies, along with Tom Hanks.

In 2016, he landed a recurring role as Will Byers in the first season of the Netflix science fiction-horror web television series Stranger Things. He was later promoted to series regular from the series’ second season onwards.

What shot Noah to bigger fame was his role in the television series, Stranger Things. The series stars Finn Wolfhard, Millie Bobby Brown, Gaten Matarazzo, and Caleb McLaughlin in the lead roles. In 2017, he won the Screen Actors Guild Awards in the category “Outstanding Performance by an Ensemble in a Drama Series” and again in 2019, he was awarded the Teen Choice Awards for Choice Summer TV Actor.

Noah’s career is already quite a success story. Since his career beginnings, he has appeared in a string of films and television shows. As of 2023, Noah Schnapp has a net worth of $4 million dollars.

It’s no doubt that Noah Schnapp is passionate about acting, but at the same time, he is also a celebrated social media influencer. He has accrued over 28 million followers on his Instagram page @noahschnapp.

Noah also runs a self-titled YouTube channel, where he has over 3 million subscribers. He has nearly about one million fans on his Twitter page.

He began acting professionally at a young age by appearing in television commercials. He also performed in several plays in school and at the local community theatre.

Noah’s parents are based in Montreal, Quebec, Canada.

He has a dog named Spaghetti.