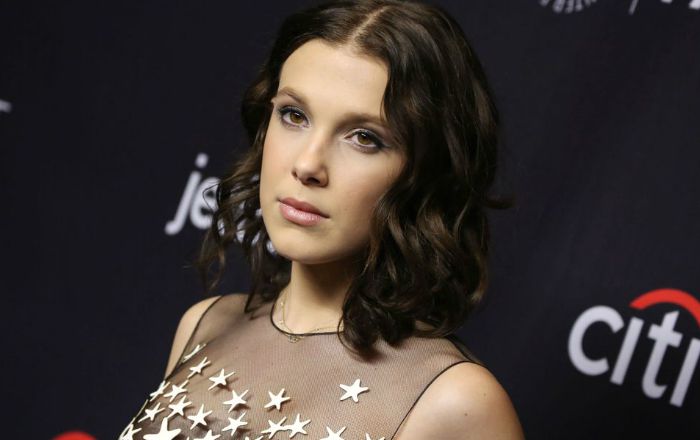 Millie Bobby Brown is an English actress probably best known for her starring role as Eleven on the hit Netflix series ‘Stranger Things’. She first gained fame for her role as Madison O’Donnell in the series ‘Intruders’. She also starred as Madison Russell in the 2019 film ‘Godzilla: King of the Monsters’.

Millie Bobby Brown attended Pokesdown Community Primary School in Bournemouth, Dorset County, England for four years, after which her family moved to Orlando, Florida. There she learned acting, singing, and dancing from a weekend stage school.

Millie Bobby Brown is rumored to be in a relationship with Jake Bongiovi, son of singer and musician Jon Bon Jovi.

She had previously been in a relationship with singer Jacob Sartorius from 2017 to 2018 and model Romeo James Beckham in 2019.

Millie Bobby Brown was cast as Madison Russell in the Godzilla sequel, ‘Godzilla: King of the Monsters’, which is set for a 2019 release.

Her portrayal of Eleven / Jane, a fictional character with psychokinetic and telepathic abilities, in the Netflix science fiction drama series ‘Stranger Things’. This role earned her a lot of acclaims and earned her the Screen Actors Guild Award for Outstanding Performance by an Ensemble in a Drama Series with her co-stars, and the 43rd Saturn Award for Best Performance by a Younger Actor in a Television Series.

On 20 April 2018, Brown became the youngest person ever to be included in TIME magazine’s list of the 100 most influential people in the world.

Millie has been affiliated with Disney’s Grand Californian Hotel & Spa. She was the face of Calvin Klein in 2017.

She has appeared in television commercials for Citigroup.

The young budding actress is active on social media with quite a large fan following. She has amassed over 33 million followers on Instagram, which is evident to prove her popularity on social media.

As of 2023, Millie Bobby Brown has an estimated net worth of $10 million, as of 2023. She spends her time between  London and Atlanta, Georgia.

Her family moved to Bournemouth, Dorset from Spain, when Brown was around four years old, and then to Orlando, Florida, four years later.

She is a big fan of Liverpool F.C.

She is deaf in one ear.

Before having her breakthrough role in ‘Stranger Things’, she has guest appeared on ‘Once Upon a Time’, ‘Once Upon a Time in Wonderland’, ‘Modern Family’, ‘Grey’s Anatomy’, ‘NCIS: Naval Criminal Investigative Service’

At 12, she became the youngest star to be the face of the Calvin Klein campaign in early 2017.

She is also the youngest person ever to feature on the TIME 100 list in 2018.

She is scared of the dark.

In 2018, Brown was cast to star and produce the film adaptation of Enola Holmes Mysteries.

Brown became the youngest person to be appointed a UNICEF Goodwill Ambassador in 2018.