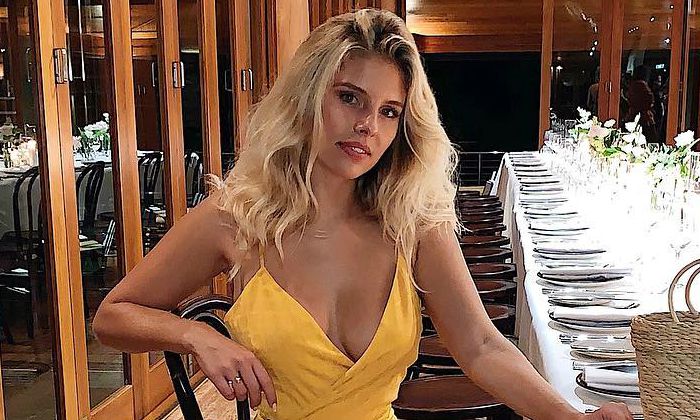 Natasha Oakley is an Australian model, entrepreneur, and social media personality, perhaps best known as the CEO of swimwear brand “Monday Swimwear”, which she co-founded with her best friend and business partner Devin Brugman. The duo dubbed “Bikini Girls” received international fame with their lifestyle blog, A Bikini A Day, launched in 2012.

The blog is known for showcasing the swimsuit look of either of the two each day. Natasha has graced the covers of several illustrious magazines including Cosmopolitan, Women’s Health, and Arcadia Magazine. Ever since the beginning of her modeling career, Natasha has been inspiring millions of young women and believes that women of all shapes and sizes can feel confident and look sexy by embracing their curves and natural beauty.

Natasha Oakley was born on the 14th of July 1990, in Bronte, New South Wales, Australia. She is currently 32 years old.

Natasha Oakley is the youngest child of Guy Oakley and his wife Lynette Oakley. Her father used to be a surf champion and currently works as a private detective. Her mother, on the other hand, was a former model and a successful entrepreneur, who started doing business at the age of 18. She won the Miss Australia title in 1980 as well as Miss Photogenic at the Miss Universe pageant competition.

She has one older sister named Samantha Oakley and also a younger maternal half-sister named Sophia Vantuno, who is a blogger and photographer.

Natasha Oakley is currently in a relationship with Theo Chambers who is the son of Chambers Cellar tycoon Steven Chambers. The couple has been dating since 2018 and can often be seen partying and hanging out together. Theo confirmed his relationship with Natasha on the occasion of New Year 2018 through an Instagram post where he posted a picture of the two and captioned it “Starting the new year with a smile”. They got engaged in July 2022.

Previously, she dated French model Gilles Souteyrand for three years from 2015 until 2018.

Natasha grew up in the beach-side suburb of Bronte in Sydney and moved to the US when she was 10 years old. She spent three years in Miami and later moved to Maui, Hawai, where she lived for two years before settling in Los Angeles.

She met Devin Brugman in Maui and the two soon became friends. It didn’t take too long for them to become business partners. At age 18, Natasha launched her own production company, Datreats Productions, in Los Angeles.

The duo shared a lot in common, mostly their love for bikinis led them to start a lifestyle blog called “A Bikini A Day” in 2012. They utilized it as a platform to promote positivity among women, emphasizing the notion that every woman should embrace her figure and natural beauty.

The blog showcased Natasha and Devin in different bikinis each day and the unprecedented success of the blog fueled their entrepreneurial ambitions, launching their own swimwear brand, MONDAY Swimwear, in 2014. Natasha is the CEO of the brand and takes care of several operations of the company including social media, moderates samples, coordinates production, day-to-day operations, and logistics, plans campaigns and content shoots, and manages budgets.

The blonde bikini model has a net worth of over $25 million as of 2022, which she earns from her lucrative social media career as well as from her business ventures. But given that she has been in the business for over a decade along with collaborations with several renowned international brands and earnings from her swimwear brand, her net worth should fall in the six-figure bracket.

She and her friend Devin used to sleep in the same bed for months before fame.

She is an avid traveler and created a fashion and lifestyle blog called “Natasha Oakley Blog” that serves as a bridge between her and her fans. She shares a lot including travel diaries, motivational stories, and daily routines with her fans.

In May 2017, Evening Standard named MONDAY Swimwear as one of the top seven swimwear brands for women.

Glamour named Natasha one of the US’s top athleisure clothing designers in July 2017.

In August 2017, Natasha appeared as herself in an episode of the show, 60 Minutes, along with Peter Stefanovic.

Natasha has a large following and fan base on her social media platforms, particularly her Instagram page has acquired more than 2.1 million followers.

With her businesses being estimated at over $63 million, Oakley was included in the Australian Financial Review’s 2021 Young Rich List.