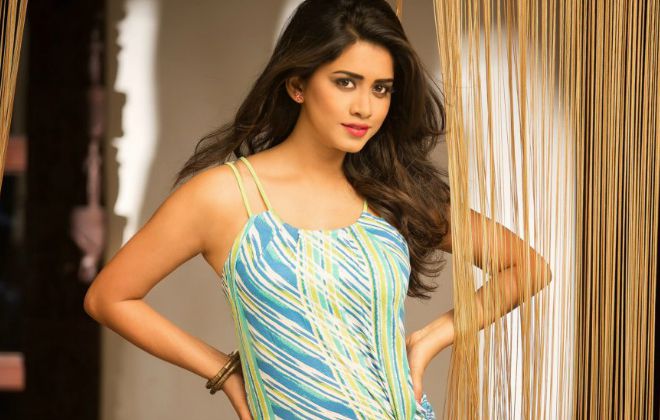 Nabha Natesh is a young beautiful actress and model from the Chikmagalur district of Karnataka, India. She is best known for her appearance in South Indian language movies. Since her debut in the Kannada film, “Vajrakaya”, Nabha has starred in movies such as Vajrakaya, Nannu Dochukunduvate, iSmart Shankar, Disco Raja, Alludu Adhurs, and Maestro. She received Filmfare Award for Best Actress nomination for her performance in Vajrakaya.

Nabha Natesh was born on the 11th of December 1995, in Sringeri, Chikmagalur, Karnataka, India. She is currently 26 years old.

Unfortunately, information about Nabha’s parents is unknown. She earned her degree in Information Science and Engineering (BE) from NMAM Institute of Technology in Mangalore, Karnataka.

Nabha Natesh is presumably single. She has kept her personal life under the wraps and thus there is not much information available of any she has had in the past or in the present.

Nabha Natesh made her onscreen acting debut with the 2015 Kannada movie “Vajrakaya” for her role as Patakha Parvathi. For her work in the film, she received Filmfare Award for Best Actress – Kannada nomination.

She hasn’t been a cast in any TV series but she has appeared in special shows for movie promotions.

She earned critical acclaim for her work in the Kannada movie “Vajrakaya” alongside Shiva Rajkumar.

She’s in her early career and thus there is no reliable information available regarding her net worth and salary. She must have earned a handsome amount of money as salaries from her films. She lives in Bangalore, Karnataka with her family.

After graduating from college, she began modeling and appeared in several commercials and print ads.

She was a tomboy during her college years.

Nabha won the title ‘Miss Intellectual’ and made it to the Top 11 in Femina Miss India Bangalore 2013.

Nabha took acting lessons at Abhinaya Taranga, a famous theatre school in Bangalore. There she appeared in a stage production called Gora, playing Lalitha, which was based on Rabindranath Tagore’s novel of the same name.

She did a guest role in the 2014 film Preeti Geeti Ityadi.

She got her break with the Kannada movie “Vajrakaya”. She was trained in horse riding for her role in the film.

She is multilingual; She can speak Kannada, Hindi and English.

In 2018, she made her Telugu feature debut with the movie Nannu Dochukunduvate as Meghana.

in 2021, she received the SIIMA Award nomination for Best Debut Actress – Telugu for her work in the movie Solo Brathuke So Better.