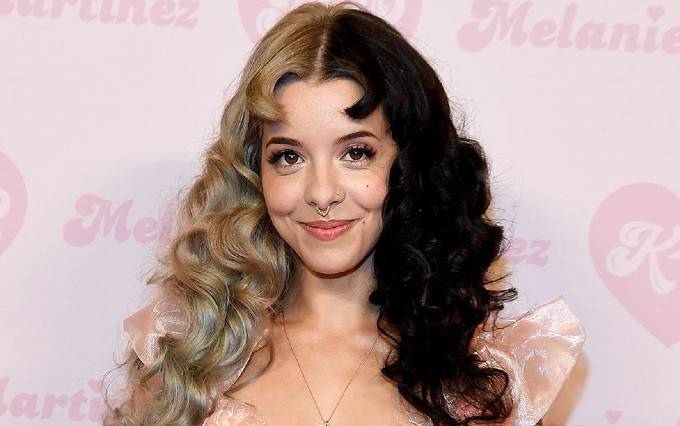 Melanie Martinez is a bankable singer, songwriter, music video director, and photographer from Baldwin, New York. She shot to fame as a contestant on the American reality show, The Voice. Shortly after being eliminated from the show, Melanie produced her first music video for her single “Dollhouse” which strengthened her popularity amongst Americans.

With the release of her debut EP “Dollhouse” in 2014, and then her studio album “Cry Baby” in 2015, Melanie made a name for herself in the pop world. She is not only a singer but also has a great entrepreneurial sense and joined hands with the cosmetic brand ‘Lime Crime’ to endorse ‘blue’ and ‘brown’ lipsticks under their elite collection.

Melanie Martinez was born on the 28th of April 1995, in Astoria, Queens, New York, United States of America. She is currently 27 years old.

Melanie attended Plaza Elementary School in Baldwin, New York. Later, she enrolled at the Baldwin High School where she learned guitar by herself by studying chord diagrams of her favorite songs that she found online.

She credited her elementary school teacher for teaching her how to sing. While at kindergarten, she learned to write poetry that would later inspire her to write songs on her own.

Melanie dated music producer Michael Keenan from 2015 until 2018. Following her split up with Keenan, she started seeing singer Oliver Tree Nickell. They confirmed their relationship in 2019 only to break up in 2020.

Previously, she had dated drummer Miles Nasta, Vinnie DiCarlo, Jared Dylan, and Edwin Zabala, an actor who portrayed the brother in Dollhouse.

Melanie Martinez released her debut Extended Play (EP), Dollhouse on 19th May 2014, which was inspired by toy sounds. She dropped her debut studio album, Cry Baby on 14th August 2015, which debuted at number 6 on the US Billboard 200.

The album’s lead single “Pity Party” was released on 1st June 2015, and received gold certification by the RIAA. Many of the album’s tracks received critical acclaim. By December 2016, she released two music videos for her singles “Mrs. Potato Head” and “Pacify Her”. Her debut album was certified Platinum on 24th February 2017 by RIAA.

Martinez has so far released one studio album, three extended plays, six singles, and eleven music videos. Her music falls within the genre of pop.

In 2012, Melanie appeared as a contestant in the American singing reality competition The Voice, finishing in the top 6. She auditioned there by singing Britney Spears’s “Toxic” song.

As of 2023, Melanie Martinez has earned a huge net worth of $8 million US dollars. Most of her earnings result from singing, music sales, tours, television appearances, and brand endorsements.

Martinez is popular on social media that has more than 10 million followers on Instagram. Her self-titled YouTube channel has over 13 million subscribers.

It was her grandmother who inspired her to sing.

As a kid, she was very emotional and not social, so preferred to stay at home.

She is afraid of the dark since her childhood.

Melanie drinks occasionally and smokes marijuana to calm down before shows.

Melanie is crazy about tattoos, and she has quite a few tattoos on her body including two hearts – one pink and the other blue, and a slice of cheese within a red lacy heart on her arms.

Her hair is naturally dark brown, and she started dying her hair with different colors when she was 16.

Melanie is scared of bees.

In 2015, she teamed up with the cosmetic company, “Lime Crime” to launch two exclusive lipstick products. The blue shade is called ‘Cry Baby’ and the brown shade lipstick is named ‘Teddy Bear’.

In October 2016, she launched her own line of fragrances called ‘Cry Baby Perfume Milk’. It was distributed by her record label ‘Atlantic Records’, making it the first label to ever distribute a perfume.

Melanie is currently working on a film that will go along with all of the songs from her second album.

On December 4, 2017, Martinez has been accused of sexual assault and rape by her ex-friend, Timothy Heller via Twitter. The following day, Martinez tweeted a response to Heller’s accusations, saying Heller “never said no” to any actions.

Some of her popular music videos on YouTube are Dollhouse, Pity party, Alphabet Boy, Carousel, Pacify Her, and Cry Baby, to name a few.