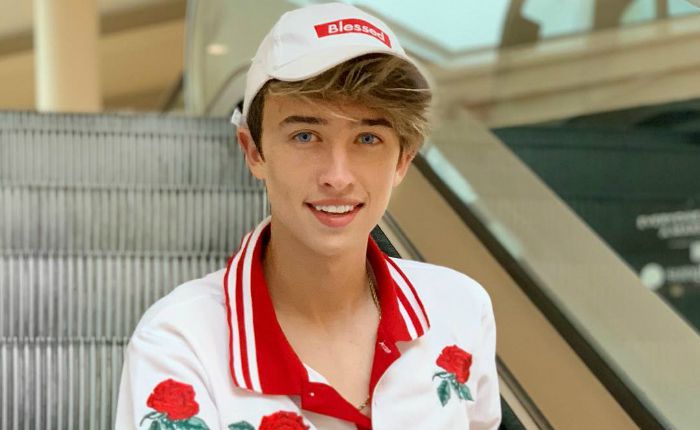 Maverick Baker is an American TikTok star and internet celebrity who leaped to international fame for his lip-sync videos on the short video uploading app, TikTok. The budding starlet is also popular on Instagram where he has amassed over 1 million followers. His younger brother, Cash, is also a social media celebrity. The Brak brothers released their debut single, ‘The Way You Move’ in November 2018.

Maverick Baker was born on December 13, 2000, in the United States.

He is currently 21 years old.

There is no information about his education, however, he must be a high school student.

There is no information available about his parents. He has two siblings, an older sister, Lani Lynn, who is also a social media star and model. She has worked with brands like Exit Peru, Neiman Marcus, and Caycee Black. His younger brother, Cash Baker, is also a TikTok star and social media influencer. He has over 4 million fans on the platform.

Maverick is currently dating a fellow YouTuber Jordan Scott. She can be seen a lot in his videos.

Maverick Baker joined TikTok (formerly Musical.ly) a few years back and his popularity on the app surged in no time. He usually posts lip sync videos of popular songs and clips. His siblings Lani and Cash often accompany him in the videos that he posts on TikTok.

Maverick’s net worth is estimated to be around $0.5 million.

His usual outfits are sportswear and denim.

The Baker brothers are good at sports. He enjoys playing basketball, acrobatics, swimming, and traveling.

He and his brother Cash released their single titled “The Way You Move” on November 13, 2018, on iTunes.

The Baker brothers run a YouTube channel titled “Cash and Maverick’, which has over 1.3 million subscribers. The Baker brothers’ channel only has one video, which is the lyric video of their single “The Way You Move”. It has received almost 1 million views in less than two weeks.