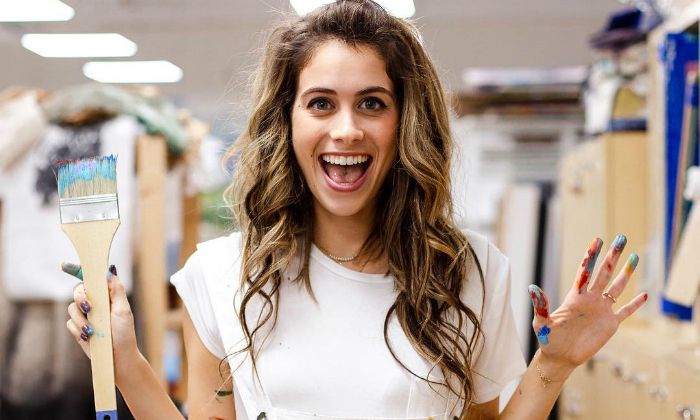 Lucie Fink is an American lifestyle host, video producer, and social media influencer who is best known for her work with the digital media company Refinery29. She has created and hosted many hit shows with them including Try Living with Lucie and Lucie for Hire. She has also collaborated with several brands to create stop motion videos and original videos for brand marketing and promotions. Fink is featured on Forbes, A Plus, and Daily Mail to name a few.

Lucie Fink was born on the 3rd August of 1992, in White Plains, New York, United States of America. She is currently 30 years old.

Lucie Fink is the daughter of Jimmy Fink and Deborah Fink. Her father is a Radio DJ while her mother is a designer. She has two siblings, an older twin sister, Allie Fink, who works in an investment firm, and an older brother, Robbie Fink, who works as a senior manager.

After graduating from school, Lucie enrolled at Johns Hopkins University where she took a pre-med major in neuroscience. She, however, graduated with a major in creative writing and a concentration in media in 2014. She is also a graduate of Phi Beta Kappa, a prestigious honor society in the United States.

Lucie has been dating Michael James Morris for over a decade now. They got engaged in April 2018 after being in a relationship for over ten years. They got married in September 2019. The couple welcomed their first child, Milo Henry Morris, on November 21, 2021.

In November 2015, she began hosting the YouTube series, “Try Living with Lucie” on the Refinery29 channel. It’s a weekly series where she records social experiments. The series won 2 bronze Telly Awards in 2017 (Best Lifestyle Content & Best Web series) and was nominated for a Webby Award in 2018 (Best Personality / Host).

She has done endorsement works for brands like Refinery29, Zola, Revlon, Pantene, Venmo, Netflix, and Dunkin.

Lucie and her twin sister attended the same university but she studied economics there. Her twin sister was born one minute before her.

While in college, Lucie worked for Straight Up Films, Atlas Media, JWT, and the UK-based shopping channel, Argos TV.

She is a very talented and skilled creator. Her original content is often commissioned on platforms such as Delta’s In-Flight Entertainment, Gloss TV, and Comcast.

In 2018, Lucie received a nomination for a Webby Award in the category of “Best Personality / Host.”

After graduation, she worked at Ogilvy & Mather as an Associate Producer in their branded entertainment division.

She was featured on NBC’s The Today Show multiple times as a millennial spokesperson and talked extensively about topics regarding her generation, precisely benefits, and issues that come with that age.

She launched her own media company called Lucie Fink Media in 2019.

Fink has around 400k subscribers on her self-titled YouTube channel.