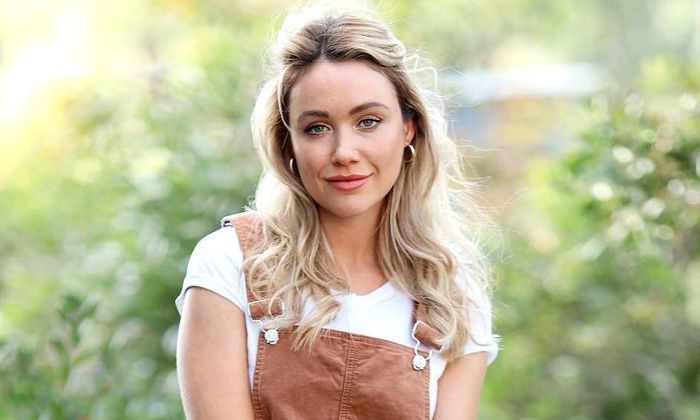 Katrina Bowden is an American actress who is most popular for her roles in such TV series as 30 Rock and Public Morals. She has appeared in both films and television, including the likes of American Reunion, Scary Movie 5, The Last Film Festival, The Divorce Party, Dirty John, and I Am the Night. in 2019, she began playing Florence Fulton in the CBS soap opera The Bold and the Beautiful, one of the most popular and long-running TV series in the United States that celebrated its thirtieth anniversary in 2017. Besides all, she has also featured on the covers of renowned publications like MAXIM and FHM and was named “Sexiest Woman Alive” by ESQUIRE Magazine.

Undeniably, Katrina has become one of the most popular faces on both small and big screens. Despite being a prominent face in the show business, she hasn’t divulged too much information about her family, siblings, or her childhood.

Though nothing is known about her personal life, that isn’t the case when it comes to her education. She studied at Saint Thomas More School in Midland Park, New Jersey, and then at Immaculate Heart Academy, an all-girls Catholic high school in Washington Township, New Jersey.

Katrina is the wife of singer and musician Ben Jorgensen. He was the lead singer and guitarist of the famous New Jersey-based band, Armor for Sleep. They both began dating in 2010 and got engaged two years later on 28 January 2012 at Four Seasons Hotel. They tied the knot on May 19, 2013, at Brooklyn Botanical Garden in New York.

In September 2021, she has been romantically linked to Iration band member Adam Taylor.

Katrina Bowden got her start in showbiz with a guest appearance in an episode of Law & Order: Special Victims Unit in 2006. That same year, she landed her first major role as receptionist Cerie in the hit comedy TV series 30 Rock.

The show was a huge hit and was well-liked among the audience for its satirical content, with lots of jokes centered around the main character Cerie. She, eventually, became a household name that led to several other major starring roles and appeared in various music videos.

Katrina’s most notable credits include Movie 43, Hard Sell, I Killed My BFF, Public Morals, The Last Film Festival, Dirty John, I Am the Night, and The Divorce Party.

Her most recent acting accomplishment is The Bold and the Beautiful, a mega-hit soap opera that has been successfully running for over thirty decades. She’s playing the role of Florence “Flo” Fulton along with the likes of Matthew Atkinson, Kiara Barnes, Jennifer Gareis, Darin Brooks, and Scott Clifton.

In her illustrious acting career spanning over fifteen years, Katrina Bowden has accomplished a lot of things. She has over 1.1 million followers on her Facebook page, and on Twitter, she has around 50 thousand followers. She is quite active on Instagram compared to other social media sites, where she’s being followed by over 170 thousand Instagram users.

Through her acting works, Katrina has already attained a huge amount of success and wealth. She has an estimated net worth of around $1 million dollars, which she accrued from a successful career as an actor. Her net worth will increase as long as she continues to pursue her career goals.

She was discovered at the age of 14.

Her early works include television commercials and print ads. In addition, she also graced the covers of various magazines like Maxim and FHM.