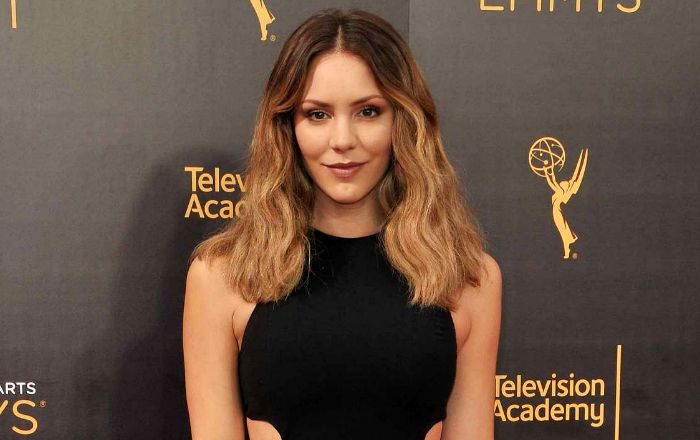 American actress and singer Katharine McPhee came into the limelight when she won the runner-up in the fifth season of American Idol. Known for her roles in films like Smash and Scorpion, Katharine launched her self-titled debut album in 2007, debuting at #no. 2 on the Billboard 200 US. She has given a number of chart-bursting singles such as “Over It”, “Had It All” and “Have Yourself a Merry Little Christmas”.

McPhee attended Notre Dame High School, Sherman Oaks from where she graduated in 2002. Later, she joined the Boston Conservatory to study musical theatres but she dropped out after three semesters to try her luck in singing and acting.

Katharine McPhee married Nick Cokas on February 2, 2008, at Beverly Hills Presbyterian Church. They ended their married in 2014 after living together for 6 years. Their divorce was finalized on February 8, 2016.

After the split from her ex-husband, she began dating actor Elyes Gabel from 2014 to 2016. McPhee is currently in a relationship with dating record producer David Foster, with whom she got engaged in June 2018. The couple on June 28, 2019, got married at the St. Yeghiche Armenian Apostolic Church in Kensington, London. They welcomed their son, Rennie David Foster, on February 24, 2021

In 2007, McPhee first appeared in the biographical musical/drama movie Crazy, which was credited as a cameo role.

In 2006, McPhee appeared on the 5th season of American Idol as a contestant. She became runner-up of that season losing the title to Taylor Hicks.

She then guest-appeared in the American comedy-drama television series Ugly Betty as herself in 2007 in the episode entitled “I’m Coming Out”.

Katharine McPhee released her self-titled debut album on January 30, 2007. The album debuted at number two on the Billboard 200, selling 381,000 copies worldwide. The album’s first single, “Over It”, was a Pop Top 30 hit and was certified gold in 2008.

Competing as a contestant in the American Idol Season 5 and starring as Karen Cartwright, one of the lead roles on Smash and as Paige Dineen in Scorpion since 2014.

Her favorite album is Adele’s 21.

The budding multifaceted artist’s net worth is estimated to be $14 million US dollars. She lives in a luxury house in Los Angles. She owns a black Ford Mustang which won at the American Idol finale.

McPhee suffered from eating disorders. At age 13, she began starving herself and exercising compulsively, and at age 17, became bulimic. McPhee gained weight in college due to her bingeing. After seven years of illness, she finally entered a three-month rehabilitation program.

In 2006, Katharine McPhee won the Favourite Hottie award from Fox Reality Awards. The same year, she won the VH1 Big in ’06 Awards in the category Big ‘It’ Girl.

In 2007, she won the award for the Exciting New Vocalist at the Young Hollywood Awards.

She won the Women’s Image Network Awards for Best Actress in a Drama Series in 2012.

She has a Chihuahua breed dog named Nena.

In February 2018, it was announced that McPhee will make her Broadway debut playing the lead female role of Jenna in Waitress.

Her fans are referred to as “The Kat Pack” and “McPhans”.