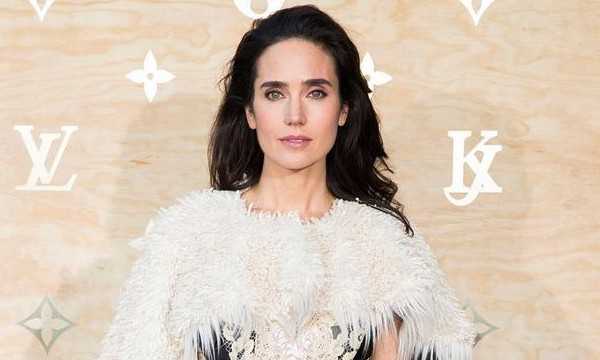 Jennifer Connelly is an award-winning actress and former model from Cairo, New York. She’s best known for her portrayal of Alicia Nash in A Beautiful Mind (2001), for which she won the Best Supporting Actress at the 74th Academy Awards. She has been featured in renowned magazines list of the world’s most beautiful women, including the likes of Time, Vanity Fair, and Esquire.

She later studied English literature at Yale University and then drama at Stanford University.

Jennifer Connelly married English actor Paul Bettany in a private family ceremony in Scotland, on January 1, 2003. They have two children, a son Stellan (born August 5, 2003), and a daughter, Agnes Lark, (born May 31, 2011). Jennifer, her husband Paula, and their two children live in Brooklyn Heights, a neighborhood within the New York City borough of Brooklyn.

Furthermore, she has a son named Kai from a previous relationship with photographer David Dugan.

Prior to her marriage with Bettany, Connelly had relationships with Russell Crowe, Josh Charles, Billy Crudup, Billy Campbell, and Dweezil Zappa.

Jennifer Connelly is best known as an actor for her role in Ron Howard’s 2001 biopic A Beautiful Mind. She was cast on the role of Alicia Nash, the wife of John Nash, who is a brilliant mathematician that won the 1994 Nobel Prize for Economics.

Starring Russell Crowe, Ed Harris, and Paul Bettany, the film won four Academy Awards. For her performance in the movie, she won nearly 10 awards, including a Golden Globe and an Academy Award for Best Supporting Actress.

She then went on to star in an array of films that included Bruce Banner’s love interest Betty Ross in the Marvel superhero film Hulk (2003), starred opposite Leonardo DiCaprio as an American journalist Maddy Bowen in the critically acclaimed Blood Diamond (2006), and played alongside Keanu Reeves in The Day the Earth Stood Still (2008), among others.

As of 2022, Jennifer Connelly has an net worth of $50 million dollars.

She began her career as a child model at the age of 10 and subsequently signed to Ford Modeling Agency.

After briefly appearing in magazine and TV adverts, she kick-started her acting career in 1984, playing young ballerina in Robert De Niro’s Once Upon A Time In America.

Her big breakthrough came in 1986 when she was cast in the role Sarah Williams, a teenager on a quest to rescue her brother Toby from the world of goblins, in Jim Henson’s fantasy movie Labyrinth.

She has appeared on the covers of magazines such as Seventeen and Muppet.

She speaks fluent French and Italian.

Connelly played Catherine Miller in the Fox sitcom The Street between 2000 and 2001.

Her favorite colors are cobalt blue, and forest green.

Throughout her career, she has worked with artists, including the likes of Antonio Banderas, Ian Richardson, Jared Leto, Eric Bana, Jennifer Aniston, and Ginnifer Goodwin.