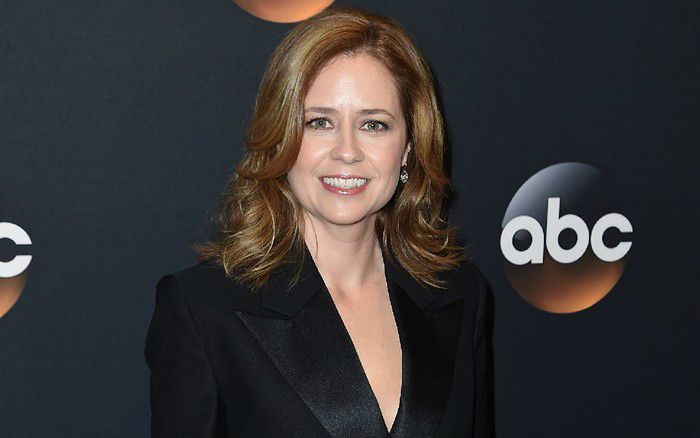 Jenna Fischer is an American actress best known for playing Pam Beesly on the hit NBC series The Office. She starred as Rhonda McNeil in NBC’s comedy-drama series You, Me and the Apocalypse.  In films, she is known for her roles in ‘Blades of Glory’, ‘Walk Hard: The Dewey Cox Story’, ‘The Promotion’, and ‘The Giant Mechanical Man’. In 2018, she was cast as Lena in the ABC sitcom, Splitting Up Together. Fischer released her first book, “The Actor’s Life: A Survival Guide” in November 2017.

Jenna Fischer was born on the 7th of March 1974, in Fort Wayne, Indiana, USA. She is currently 47 years old.

Jenna Fischer is the daughter of Anne (née Miller), a history teacher, and James E. “Jim” Fischer, who is an engineer. Her younger sister, Emily, is also a teacher.

She then enrolled at Truman State University to study pre-law history major but later changed her mind and was admitted to a bachelor’s degree in Arts with a specialization in theatre and minors in Journalism.

Jenna Fischer has been married twice. She married her first husband James Gunn in October of 2000, and the couple divorced in 2008 eight years later.

In 2001, Jenna had her first television role on the comedy series Spin City as a waitress.

Her first directorial attempt happened in 2004, LolliLove, a mockumentary, in which she and her ex-husband, James Gunn, played the main characters in the movie. The film earned her rave reviews and was honored with the ‘Screen Actors Guild Emerging Actor’ award.

Her portrayal of Pam Beesly on the NBC sitcom The Office is one of the best works in her career, for which she was nominated for the Primetime Emmy Award for Outstanding Supporting Actress in a Comedy Series in 2007.

Jenna has appeared in TV commercials for brands like Puma (2006), Proactiv (2009), Wisconsin Milk, Board and Make a Wish.

As of 2023, Jenna Fischer has a net worth of $16 million dollars. She purchased a $1.9 million luxury home in the Glendale area of L.A. in 2012, an estate that was previously owned by baseball player and coach Casey Stengel.

She was raised in St. Louis, Missouri, where she spent most of her childhood.

She took acting classes when she was six years old. There she met Sean Gunn and became good friends with him.

While studying at college, she performed with a touring Murder Mystery Dinner Theatre group. During this time, she also performed Commedia dell’arte with the Zoo District Theatre.

Fischer worked as a receptionist in various offices. She also worked as a telephonic psychic for a brief time.

She struggled for three years before landing a small part on the television sit-com Spin City in 2001.

Jenna auditioned for the role of Sydney in Alias (2001) but lost to Jennifer Garner.

She cites Kate Hudson, Olivia Munn, and Olivia Wilde to be her fashion inspirations.

Jena is a fan of the NFL’s Dallas Cowboys and an avid fan of the St. Louis Cardinals baseball team.

Fischer is passionate about animal rescue, and she is involved with the Los Angeles organizations Kitten Rescue and Rescue Rover.

She has a pet cat named Andy.