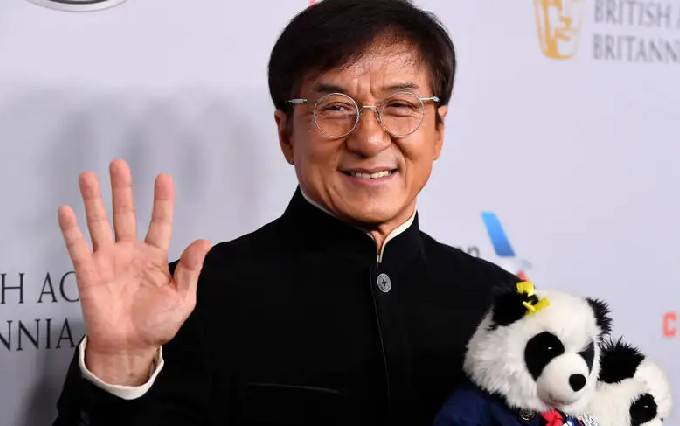 Jackie Chan is a Hong Kong actor and singer who is best known for his work in the entertainment industry. Some of his notable movies include the Rush Hour trilogy, Enter the Dragon, Shanghai Noon, and The Karate Kid. As a talented artist, Jackie earned fame for his acrobatic fighting style, comic timing, and innovative stunts, most of which he performs in his movies.

Starting his career as a stuntman, Chan has grown to become one of the most influential and richest personalities in the entertainment world. He has received stars on the Hong Kong Avenue of Stars, and the Hollywood Walk of Fame. As of 2023, Jackie Chan has a net worth of $400 million dollars.

Jackie Chan was born on the 7th of April 1954, in Victoria Peak, British Hong Kong. He is currently 68 years old.

Chan got enrolled at the Nah-Hwa Primary School on Hong Kong Island, but he failed his first year due to which his parents removed him from School.

In 1960, he attended the China Drama Academy, a Peking Opera School run by Master Yu Jim-yuen, where he excelled in martial arts and acrobatics. Around that time, he became a member of the Seven Little Fortunes, a performance group. After entering into the industry, Chan got trained in hapkido from grandmaster Jin Pal Kim and earned a black belt.

Jackie Chan was also eventually trained in other forms of martial arts like Karate, Judo, Taekwondo and Jeet Kune Do. In 1976, Chan briefly attended Dickson College and simultaneously worked as a construction worker in part-time.

Over the years, Jackie Chan has received several honorary degrees from reputed universities:

Joan Lin (1981 – Present) – Jackie Chan dated Taiwanese actress Joan Lin in 1981 and they both married in 1982 in Los Angeles. They together have a son, Jaycee Chan who is also an actor.

Teresa Teng – Chan had a brief relationship with Taiwanese Pop Singer Teresa Teng, but their relationship didn’t last long. The couple broke out citing a difference in character, which is apparently mentioned in his autobiography.

Elaine Ng – Jackie and Elaine Ng were romantically linked in the late 90s. She has a daughter with him. When their relationship became publicly known after her pregnancy, Chan stated he had “only committed a fault that many men in the world commit”.

Kim Hee-sun –  Chan and Kim Hee-sun got intimated while filming The Myth in 2005.

Chan began acting in movies since he was five. As a child artist, he was first seen in the 1962 film Big and Little Wong Tin Bar. In the initial days of his career, he appeared in minor roles in movies. Ten years later, he started working as a stuntman in movies.

He first starred in the lead role in Little Tiger of Canton that had a limited release in Hong Kong in 1973.

Jackie ventured into television industry in 1989, where he appeared in an episode of documentary series The Probe Team as himself.

Jackie Chan is one of the highest-paid actors in the world who has a net worth of $400 million, as of 2023. Chan’s last year’s earnings were $61 million dollars. Movies, Royalty, Endorsements, Production Studios, Businesses were a few sources from where he accumulated his wealth. He has his own production house, Skiptrace. Needless to say, Jackie Chan is one of the wealthiest people in the entertainment industry.

Chan has a great sense of taste when it comes to auto collection. He owns a custom-built Lamborghini Aventador, a Bentley Mulsanne, and a Subaru Impreza Evo.

Apart from cars, Chan is a proud owner of Legacy 500 and Legacy 650 luxury jet. The former cost him $20 million while the latter hit him $30 million. Check the above link to explore the features of his private jet.

Interestingly, Jackie owns several real estate properties in the US and China. In fact, many of those are secret houses which he recently revealed that he has “secret houses all over the world” complete with “Secret rooms”.

He bought a two-story French inspired villa in Beverly Hills, California, USA for $3 million in 1998. This lavish house features six bedrooms, 5.5 bathrooms, three fireplaces, a pool, and many amenities.

The global star is overwhelmed by his fans on social media. Follow him on:

The multi-faceted Jackie Chan is an international celebrity and the most recognizable face on the planet.

He was born in a poor family that his parents had to borrow money to pay the doctor for his delivery.

Started his career as a child artist, he would later explore several dimensions of his talents such as stuntman, stunt choreographer, producer, director, screenwriter and singer that obviously raked his net worth.

The legendary actor quickly attained his stardom status, thanks to his adorable looks, multi-talents, charisma and generous heart.

Jackie Chan entered the entertainment industry at the age of 8, and since then, he has earned a name for himself in the showbiz. Particularly, Chan is best known for his stunt sequences in his movies, which he performs by himself.

He took the stage name Sing Lung when he was first introduced as a stuntman in the film, Fist of Fury that starred Bruce Lee. Since then, his fame, wealth, reputation, humanitarian efforts have only surged.

During a career spanning more than five decades, Chan has acted in more than 150 films which also includes a few Hollywood films. The Rush Hour franchise was his best in Hollywood, which earned him celebrity status in the United States. Shanghai Knights, Shanghai Noon, The Tuxedo, The Karate Kid, Rush Hour Franchise, Police Story, etc were some of the best films in his career.

Chan is a trained Opera singer and has released 11 studio albums, nine compilation albums and even performed at the 2008 Beijing Olympics.

His first adult movie was All in the Family and it took 34 years to do his next sex scene. And, In fact, it is his only film that doesn’t include a fight scene. He loves children and always wanted to be a role model for them, so he never uses swear words in his film. Also, he had ever done a villain role in his films.

Since he worked as a stuntman and perform all stunts on his own, Chan has suffered several injuries and broke almost all of his body parts. This was the reason why it was not insured in the US.

He starred 15 creative roles in the film Chinese Zodiac, becoming the first person to do so. This got him a Guinness World Record. He can speak many languages like Cantonese, Mandarin, English, German, Korean, Japanese, Spanish, Thai, etc.

Jackie is also a great businessman who has his own clothing line, a chain of sushi restaurants, Jackie Chan signature club gyms and more. He also owns several production companies and modeling agencies. The legendary actor today is one of the finest actors on the planet.