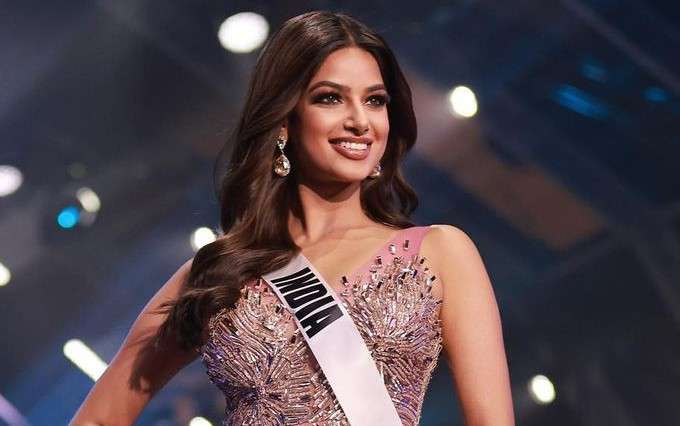 Harnaaz Sandhu is an Indian actress, model, and beauty queen from the village of Kohali in Gurdaspur district, Punjab. She recently came to public attention after being crowned as the winner of Miss Diva Universe 2021, becoming the only third Indian to do so. She made every Indian proud as she brought back the coveted crown to India after 21 years. The other two Miss Universe titleholders were Lara Dutta (2000) and Sushmita Sen (1994).

The 22-year-old beauty took the entire country by storm when she was crowned Miss Diva Universe 2021. The 2020 titleholder Andrea Meza of Mexico crowned her successor Sandhu during the pageant. She began modeling while pursuing her bachelor’s degree and during that time, she has won several pageants and beauty competitions. On Instagram, she has over 2 million followers.

She has Jat Sikh ancestry.

Harnaaz Sandhu is the youngest daughter of Pritampal Singh Sandhu, a realtor, and Rabinder Kaur Sandhu, who is a gynecologist. She has an elder brother named Harnoor Singh Sandhu.

She is currently pursuing her master’s degree in public administration.

Unfortunately, there isn’t too much information about Sandhu’s romantic aspect of life as of yet. She has kept her personal life private to the best of her abilities.

Sandhu’s name will go down in history as she became the third Indian to win the coveted Miss Universe 2021 pageant after Lara Dutta and Sushmita Sen. She won the title after 21 years by beating some 80 contestants at the event held at Red Sea Resort in Israel’s Eilat.

She was born and raised in Punjab. At age 6, she moved to England and returned back to India two years later in 2008, where she currently resides in.

She has been participating in beauty pageants since she was a teenager.

Prior to taking home the Miss Universe 2021 title, she has won several titles including Miss Chandigarh 2017 and Miss Max Emerging Star 2018.

As an actress, she is known for her appearance in Punjabi movies such as Bai Ji Kuttange and Yaara Diyan Poo Baran.

In 2021, she managed to Miss Diva 2021 which earned her the right to represent India at the Miss Universe pageant. At the 70th edition of the event held in Israel, she made it to the top 3 and was eventually crowned Miss Universe 2021.

She is multilingual and speaks fluent Punjabi, Hindi, and English.

She is a huge fan of actors Priyanka Chopra and Shah Rukh Khan.