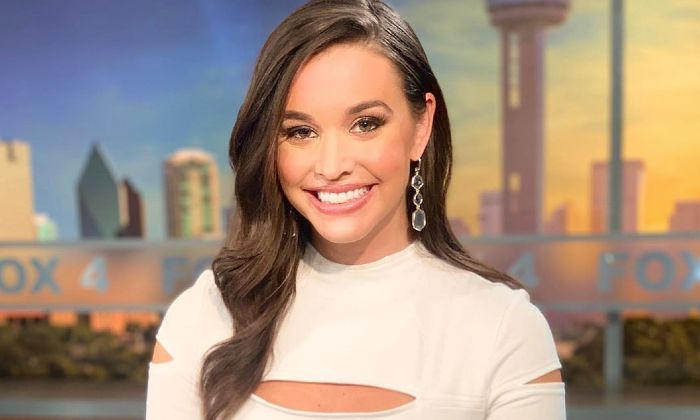 Hanna Battah is a born and bred Minnesota girl who works as a news anchor and reporter for Fox 4 channel KDFW. Her interest in current events and politics led her to attend the University of Missouri where she was a broadcast journalism and political science major and is pursuing a long and fruitful career in it. Hannah quickly found success in working with local television channels before landing on Fox4. Hanna has made a name for herself in the media industry and has become a household name in Dallas, Texas. She won the Heart of America Gold Award from the Kansas City Press Club for her fierce reporting on the Joplin tornado in 2011.

Hanna Battah was born on the 6th of May 1993, in Minnesota, United States of America. She is currently 28 years old.

There’s not much known regarding the personal matters of Hanna, including her family, education, and early life. Her mother, Debra, works in the medical field, while her father, whose identity is unknown, was a political science professor at Minnesota State University.

Hanna grew up with her three sisters, two older and one younger, Anisa, Nadia, and Leena. Two of her sisters are nurses. She attended the University of Missouri from where she graduated with a degree in broadcast journalism and political science. While studying, she worked as a barista at Caribou Coffee, a popular coffee shop chain in Minnesota.

Now, this is the topic that most of you are probably looking forward to. Well, not much is known about her romantic life. Going by her Instagram posts, it is certain that she’s in a relationship with an unidentified man. It looks like they have begun dating in mid-2019.

Hanna Battah got her start as an anchor and a multimedia journalist at KOMU TV, an NBC affiliate station based in Columbia. After spending several years there, she secured at KBAC CBS 29 as well as KBFX Fox58 in Bakersfield, California, in 2015 where she co-anchored noon newscasts and reported for evening newscasts. During her time there, she covered several interesting and serious stories

She left the station and joined KDFW television Fox 4 in June 2018 as a weekend morning anchor and reporter. She hosted the weekend editions of “Good Day” as well as contributed to the weekday editions as a reporter. Within a few months, she became a part of the weekday team, pairing up with Brandon Todd.

As a passionate journalist, Hanna Battah is very active on social media with a significant fan following. She has amassed more than 25 thousand followers on her @hannabattah Instagram. She can be found on Twitter under the same name, where she has nearly 12 thousand followers. Her Facebook page is got over 27 thousand followers.

Her surname Battah is pronounced “bah-TAH”.

Her first job was as a barista at a coffee shop called Caribou Coffee in her hometown of Minnesota.

In college, she worked for the campus television station called MUTV, covering sports. Her first story was about the Mizzou volleyball team featuring the newest players.

Her early works include an internship in the news department of WCCO in Minneapolis, a political/reporter editor at Missouri Digital News in Jefferson City, and a Meredith-Cronkite Fellow at KPHO in Phoenix.

In 2017, Hanna traveled to Santa Barbara and Ventura Counties in California to cover what became the largest wildfire in state history, working alongside fire workers in full gear and recording the flames first-hand.

The latter won her the Heart of America Gold Award from the Kansas City Press Club.

She is an avid swimmer and runner.

She is a huge fan of Minnesota Vikings.