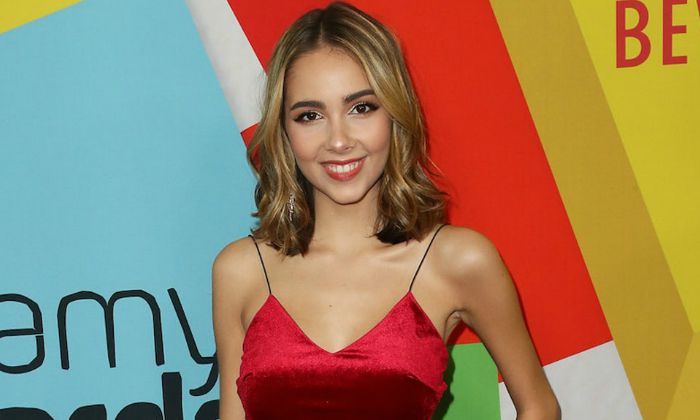 Haley Pullos is an American actress who came into the limelight for her recurring role as Molly Lansing-Davis in the American daytime soap opera General Hospital. She joined the cast in 2009 and has since been a part of the series, which earned her four Young Artist Awards between 2010 and 2014. She also had a recurring role as Addison Pierce in the television series Mr. Student Body President.

Apart from these recurring roles, Haley also landed guest roles in shows like The Middleman, Dollhouse, House, Instant Mom, Growing Up Fisher, Scorpion, and The Mick. Her film credits include Dead Air, The Collector, Dark Horse, and Montana Amazon. As of 2022, Haley Pullos has a net worth of $1 million.

Haley Pullos was born on the 10th of July 1998, in Palo Alto, California, United States of America. She is currently 24 years old.

Haley Pullos is the daughter of Alexander Dean Pullos and Judith K. Morrisey, who is a realtor. She has two sisters and two brothers. She is a very private person and has not revealed most of her personal life to the public, including details about her educational qualifications.

Haley is currently single, however, she was in a relationship with actor Jimmy Deshler, her General Hospital co-star, who played her on-screen love interest in the drama series.

Haley Pullos landed her first acting role as a child named Patron in the movie ‘Carney Tales’ in 2002.

She made her television debut as a student on the Fox network’s series ‘Till Death’. That same year, she made a guest appearance as Mara in one of the episodes of the drama series,’ Moonlight’.

Her portrayal of Molly Lansing-Davis in the longest-running soap opera ‘General Hospital’ is ultimately the most prominent work in her career. She is playing the character for over a decade and won a series of Young Artist Awards from 2011 to 2014. In 2015, she was nominated for Daytime Emmy Award in the category “Outstanding Younger Actress in a Drama Series” for her role in the drama series.

According to various sources, Haley Pullos’s net worth is estimated to be around $1 million dollars. Since the actress has kept several aspects of her life hidden from the public eyes, her financial figures including her salary and net worth aren’t been disclosed yet.

She is one of the finest actors of her generation whose growth has been witnessed from a pretty child to a gorgeously beautiful woman.

In 2008, she was cast to play the younger version of Jennifer Love Hewitt’s character on the series Ghost Whisperer.

She had guest roles on a handful of TV shows such as Dollhouse, Instant Mom, Til Death, Scorpion. and The Mick.

She played Teresa in the 2012 American independent black comedy road film The Montana Amazon, which won the Best Feature Film at the Big Apple Film Festival.