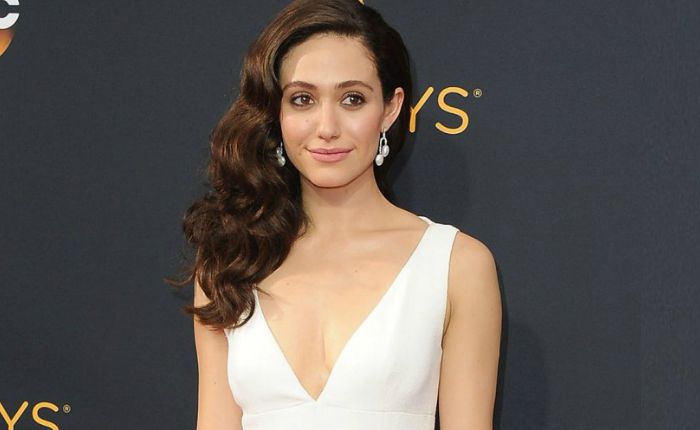 Emmy Rossum is an American actress and singer who gained a lot of attention lately for her portrayal of Fiona Gallagher in the television series Shameless. She won the Saturn Award for her performance as Christine Daaé in The Phantom of the Opera and went on star in Mystic River and The Day After Tomorrow. As a singer, she dropped her debut album “Inside Out” in 2007, followed by her second album “Sentimental Journey” in 213.

Emmy Rossum was born on the 12th of September 1986, in New York City, New York, United States of America. She is currently 35 years old.

Emmy Rossum was raised by his single mother. Cheryl Rossum, who worked as a corporate photographer. Her parents divorced when she was in her mother’s womb. She has barely met her father throughout her life.

Emmy Rossum had dated many men at different stages of her life. She dated American actor Topher Grace from 2005 to 2007 and was an item with actor Milo Ventimiglia in 2007.

Rossum got romantically linked up with American music producer, Justin Siegel in 2007 and they got married in February 2008. However, the two couldn’t able to carry over their relationship further and filed for divorce on September 25, 2009. with their divorce finalized in December of the same year.

After her split with Siegel, she started off a new relationship with Counting Crows frontman Adam Duritz but that also didn’t last long. They both parted ways in September 2010 after dating for a year. She began dating her Shameless co-star, Tyler Jacob Moore in 2011 until they split in July 2013.

Emmy Rossum had her first acting role as Luanne in the 1996 TV film, Grace & Glorie. She made her feature film debut as Deladis Slocumb in the 2000 drama film Songcatcher.

She was cast as Abigail Williams in the CBS soap opera As the World Turns in 1997.

Emmy Rossum released her debut album “Inside Out” on October 23, 2007, via Geffen Records. The album peaked at 199 in the U.S. Billboard charts and consists of 13 tracks. She released her second album “Sentimental Journey” on January 29, 2013, via Warner Bros. Records. The album peaked at 92 on the U.S. Billboard charts, and number one in Jazz Albums.

Rossum received critical praise for portraying the character Fiona Gallagher in the television series Shameless since 2011. Her other notable acting credits include Mystic River (2003), The Day After Tomorrow (2004), The Phantom of the Opera (2004).

As of 2023, Emmy Rossum has an estimated net worth of $12 million. She owns a Lexus RX Hybrid and a Mercedes ML320 BlueTec.

At age 7, she became a member of New York’s Metropolitan Opera Children’s Chorus. She sang in six languages in 20 operas, including La bohème, Turandot, a Carnegie Hall presentation of La damnation de Faust, and A Midsummer Night’s Dream and earned somewhere between $5 to $10 a night.

She studied cooking at Le Cordon Bleu in London.

Rossum is intolerant to any foods containing gluten as she suffers from celiac disease, an autoimmune disease.

For her role in The Phantom of the Opera (2004), she attended a séance at the Spiritualist Association of Great Britian, where a medium talked to her about her late grandmother.

When she isn’t shooting, she enjoys reading, horseback riding, and ballet.

She is a cousin to world-famous fashion designer Vera Wang through Vera’s husband Paul Becker.

She is a huge fan of Audrey Hepburn, and as a teenager, she played Hepburn in the television biopic The Audrey Hepburn Story in 2000.

She co-starred with Jake Gyllenhaal in the 2004 film, The Day After Tomorrow.

She served as a YouthAIDS ambassador and was a face of “PiNKiTUDE”, which is a campaign started to increase awareness among people regarding breast cancer.

In 2015, Rossum campaigned with the Best Friends Animal Society to encourage animal adoption.

She describes herself as “a spiritual person, but I’m not especially religious.”