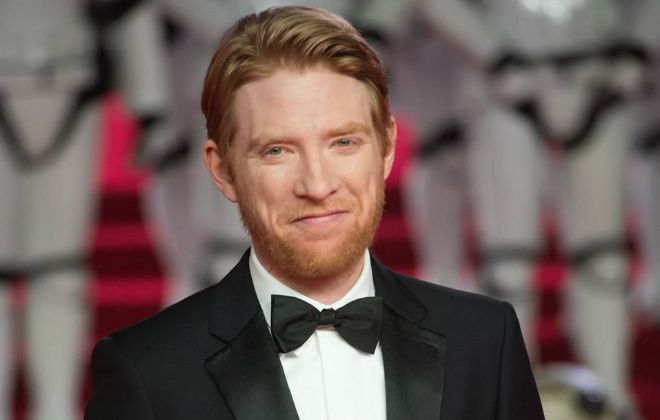 Domhnall Gleeson is an Irish actor and writer who first gained widespread recognition for his role as Bill Weasley in Harry Potter and the Deathly Hallows: Part 1 and Part 2, alongside his father Brendan Gleeson who played Alastor Moody. He further gained fame for his appearances in four Academy Award-nominated films, Caleb Smith in Ex Machina, Jim Farrell in Brooklyn, Captain Andrew Henry in The Revenant, and General Hux in Star Wars: The Force Awakens. He won three IFTA Awards for his roles in When Harvey Met Bob, Anna Karenina, and Frank. In 2020, he was named one of Ireland’s greatest film actors by The Irish Times.

Domhnall Gleeson was born on the 12th of May 1983, in Dublin, Ireland. He is currently 39 years old.

Domhnall attended Malahide Community School and graduated with a Bachelor of Arts in Media Arts from the Dublin Institute of Technology.

Domhnall prefers to keep his private life away from the media, however, he was romantically linked to Juliette Bonas, an Irish producer, in the past.

Domhnall Gleeson began his acting career in 2005 when he was cast as Bernard in Stephen Bradley’s horror-comedy film, Boy Eats Girl.

Before that, he appeared alongside his father in Martin McDonagh’s short film Six Shooter in 2004, which won the Academy Award for Best Live Action Short Film.

His notable appearances in the film include Harry Potter and the Deathly Hallows – Part & Part 2, Shadow Dancer, Anna Karenina, About Time, Frank, Star Wars: The Last Jedi, The Revenant, Ex Machina, and The Little Stranger.

Gleeson had his first TV appearance in a 2001 episode of the British television drama series, Rebel Heart, where he played the character of playing Bryne.

He has also appeared in TV series such as The Last Furlong, Your Bad Self, and Earth’s Greatest Spectacles.

Gleeson met with critical acclaim and won many awards for his performance as Bill Weasley in Harry Potter and the Deathly Hallows Part 1 and Part 2, which were released in 2010 and 2011.

As of 2023, Domhnall Gleeson has a net worth of $7 million, according to Celebrity Net Worth.

At school, he performed in school productions of Grease and King Lear. After graduating from college, he started appearing in both film and stage.

In 2007, appeared in stage productions of a Hugh Leonard adaptation of Charles Dickens’s Great Expectations; and a revival of David Mamet’s American Buffalo, which earned him a Best Supporting Actor nomination at the Irish Times Irish Theatre Awards.

Gleeson was named one of 2011’s Shooting Stars at the Berlin International Film Festival.

He and his father are huge fans of the English football team Aston Villa.

Gleeson won the 2011 Ifta Award for Best Actor for his performance in the film television film When Harvey Met Bob.

He appeared in the Academy Award nominations for films such as Brooklyn, Ex Machina, Star Wars: The Force Awakens, and The Revenant.

In 2015, he won the Irish Film and Television Awards for Best Actor in a Supporting Role for his performance in the film Frank.