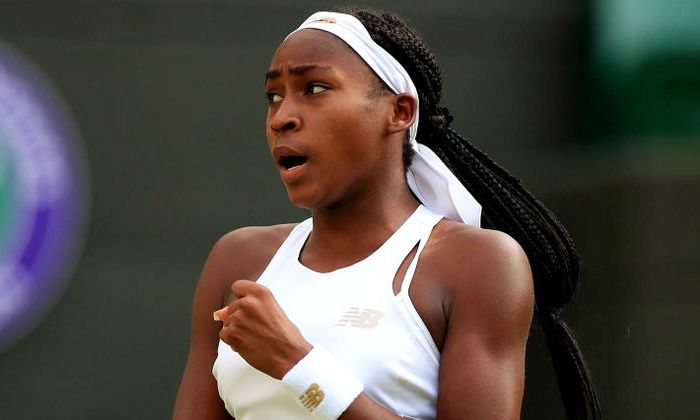 Cori Gauff is an American professional tennis player from Atlanta, Georgia. At the young age of 15, this right-handed player is already a prominent name in the world of sports and has many credits to her name. She made history on July 1, 2019, as the youngest ever player to upset the five-time champion, Venus Williams, in straight sets, that too in her Grand Slam debut match. Cori is the youngest ever female player to advance to the finals in the US Open singles and also the youngest female player to debut in Grand Slam. In 2018, she became the second-youngest player to win the Junior French Open.

Cori Gauff was born on the 13th of March 2004, in Atlanta, Georgia, United States of America. She is currently 18 years old.

Wondering where this young girl pulls off the sporting abilities? Obviously, without a doubt, she inherited the sporting adroitness from her parents as both of them are athletes. Her father, Corey Gauff, played basketball at Georgia State University while her mother, Candi Gauff, (Odom) was a former athlete and teacher. She used to be a track and field athlete at Florida State University. She has two younger brothers, Codey and Cameron Gauff.

Undoubtedly, sports run in her veins and she wanted to be a tennis player at a very young age. However, it wasn’t that easy for her to live in Atlanta to get pro-level training. So her family moved to Delray Beach, Florida to have better opportunities to train in tennis and enrolled her in the homeschooling program. Her father is her head coach who gave her the initial training. She spent her early years training at the New Generation Tennis Academy in Delray Beach, Florida.

Cori Gauff is possibly single as she hasn’t dated anyone publicly. It seems she is currently focusing on the sport and has no time for romantic kind of stuff.

At age 13, Cori Gauff became the youngest ever player to reach the US Open girl’s finals. She opened 2018 with a massive win in her maiden ITF match, in May last year.

The same year, Cori won her first career junior Grand Slam title at the French Open. She continued her victory and own the Girls’ Doubles at the US Open with her partner Caty McNally in September 2018. She finished 2018 with a bang. Gauff became the youngest female player to hold the No.1 position in the junior world girl’s event.

Gauff started off the year 2019 with a mark. She recorded her first WTA match-win against Caty McNally at the Miami Open and became eligible for Wimbledon in the Open Era after successive victories. At 15, Cori is the youngest person to make her grand slam debut.

It was an absolute shocker for everyone when the tennis prodigy defeated Venus Williams in straight sets 6-4 6-4 in the first round of her Grand Slam debut.

The net worth of Cori Gauff is believed to be around $2.5 million dollars. She has already signed multi-year endorsement deals with New Balance, tennis rocket manufacturing company Head and an Italian food company Barilla, which also sponsors Roger Federer. According to Forbes, she would earn at least $1 million from these deals in 2019. Without a doubt, Gauff’s net worth to go multifold in the years to come.

She began playing tennis at the age of seven.

Growing up, she idolized both Williams sisters, Venus and Serena, and her dream came true when she was drawn against Venus in her Grand Slam debut.

In an interview, she stated that Serena Williams is the reason why she plays tennis.

At age 11, she was selected by Serena Williams’s coach Patrick Mouratoglou as part of his Champ’Seed foundation and trained with him in Nice, France.

Gauff will not be playing a full WTA schedule anytime soon before she turns 18. As a 15-year-old girl, she can play up to 10 pro events.

In 2021, She became the second-youngest American player to be selected for the 2020 Summer Olympics in Tokyo.

In 2022, Cori won her first WTA 1000 doubles title with Jessica Pegula, beating Veronika Kudermetova and Elise Mertens. Thanks to the win, she reached her career-high rankings of No. 10 in doubles on February 28, 2022.