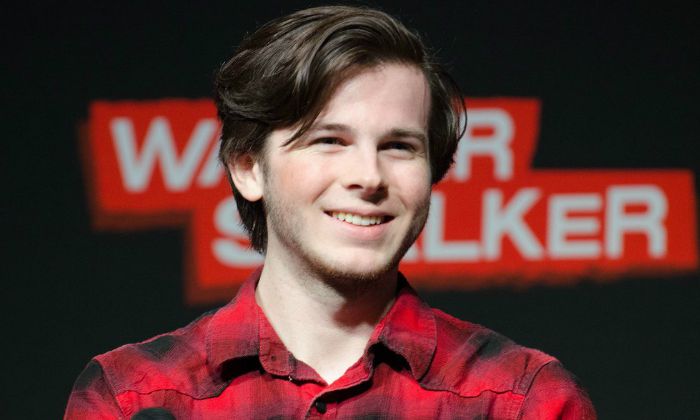 Chandler Riggs is an American actor who shot to international prominence for his portrayal of Carl Grimes in all eighty seasons of AMC’s TV drama The Walking Dead. His stellar performance in the series earned him three Saturn Awards and a Satellite Award. In 2019, he landed a recurring on the ABC drama series A Million Little Things as Patrick “PJ” Nelson. Riggs’s film credits include Get Low (2009), Mercy (2014), and Keep Watching (2017).

Chandler Riggs was born on the 27th of June 1999, in Atlanta, Georgia, Unites States of America. He is currently 22 years old.

Chandler Riggs is the oldest of two children to parents Gina Ann (née Carlton) and William Riggs. He grew up along with his younger brother, Grayson. His father plays in a band called Jillhammer. He has English, German, Scottish and distant Welsh ancestry.

Riggs attended Etowah High School in Woodstock, Georgia. He was also homeschooled for a few years before going to a regular school.

After high school, he got admission at the University of Georgia and Auburn, however, he deferred studied and moved to Los Angeles to pursue acting.

He also attended the Theater of Stars in Atlanta to hone his acting skills. Apart from acting, he also studied tap dancing for several years.

Talking about his romantic aspect of life, Chandler Riggs is undoubtedly a heartthrob of many girls. He has been in a relationship with his girlfriend Haleigh Hekking since 2018. She is best known as a model and social media star.

The budding actor was also linked to American actress Hana Hayes and another woman named Brianna Maphis in the past.

Chandler Riggs was just only five years old when he landed his first acting role in the 2006 indie horror film Jesus H. Zombie, playing the role of Egon aka Zombie.

Riggs is quite a lucky charm as he made his television debut as Carl Grimes on the AMC horror-drama television series The Walking Dead. The actor clinched the lead role at age 10 in 2010, his biggest role to date, and continued to be part of the series until his character was killed off midway through the series’ eighth season.

Chandler received a lot of accolades and praise for his performance throughout the series and won several awards including three Saturn Awards, one Young Artist Award, and a Satellite Award.

As a singer, Chandler has released a number of tracks including his debut single “Hold On” (feat. Lolaby) in 2017. He dropped his first EP titled “Lunar” on February 5, 2018. It spawned four singles.

Riggs tasted the fruit of success quite early in his acting career. Not only did he land a role in the theatre production of Munchkin, but he also starred in both the feature film and television film before turning 10.

His role in the popular AMC horror drama television series The Walking Dead is considered to be his best in his career. To prepare for his role and to understand the nature of his character, he started reading the comic, which he hadn’t read until then. The series was one of the highest-rated series in the American cable television history, eventually making him a household name.

At a young age, A Million Little Things actor has made quite an impressive net worth from his fascinating career. Chandler’s net worth stands at $8 million in 2023. He was paid $100 thousand per episode of The Walking Dead series.

Riggs’ acting career took off at age 4 when he was cast in the Atlanta’s Fox Theatre production of “Munchkin” and “The Wizard of Oz”.

At age 10, he appeared in the television film “The Wronged Man” as Ryan Gregory.

As a DJ, Riggs has performed in various popular events like the Fire Festival in 2019 and the EDC in 2018.

Besides being an actor, Riggs is also recognized as a drummer and a tap dancer.

He auditioned for the role of Spider-Man in Captain America: Civil War, which he lost it to actor Lucas Hedges.

Chandler Riggs’ character in The Walking Dead was killed off early in the series for unknown reasons.

He is a huge fan of actor Grant Gustin and his character as Barry Allen in The Flash.