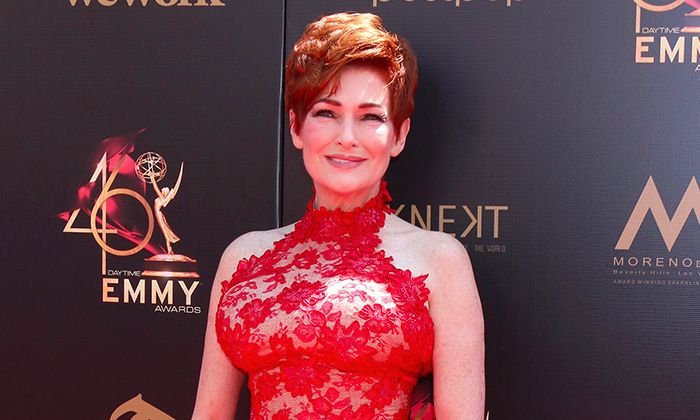 Carolyn Hennesy is an American actress and author who reached stardom through her role as Diane Miller on the daytime television series General Hospital. She gained even more popularity with recurring roles in such television series as Dawson’s Creek, Cougar Town, Jessie, True Blood, and Revenge. In her illustrious acting career, she has appeared in over 35 movies, including Necessary Evil, Hybrids, Star Wars: The Rise of Skywalker, and Fatal Affair.

Carolyn’s exceptional performance in the web series The Bay has earned her her first Daytime Emmy Award. Besides all this, she has also lent her voice to a number of video games such as Star Trek: Bridge Crew, The Technomancer, Golden Axe: Beast Rider, and Ghost Rider, among many others.

Carolyn Hennesy was born on the 10th of June 1962, in Encino, California, United States of America. She is currently 59 years old.

She is the daughter of Dale Hennesy and Ramona Hennesy. Her father is an Academy Award-winning art director and production designer, who won an Academy Award in the Best Art Direction category for his work in the 1966 film Fantastic Voyage. She has two brothers; one of whom, Scott Hennesy, works at Disney as an Imagineer.

Carolyn is the niece of actress Barbara Rush and cousin of Claudia Cowan and Christopher Hunter. From an early age, she became very interested in acting, which may be due to her father’s influence as he was already working in the entertainment industry.

She studied acting at the prestigious American Conservatory Theatre and later at the Royal Academy of Dramatic Arts, located in London. She also attended the California State University at Northridge.

During the early days of her career, she has performed in over 100 stage productions as well as toured with a bunch of comedy troupes, including the likes of the Groundlings and the ACME Comedy Theater.

Carolyn Hennesy married Donald Agnelli in a very intimate wedding ceremony in 2007. After six years of marriage life, the couple filed for divorce in 2013 which was finalized the same year. Having been married for over six years, Carolyn and Donald did not have a child of their own.

Carolyn Hennesy started off her career onstage with a number of theatre productions, including the likes of Mark Taper Forum, Arizona Theatre Company and the Geary Stage. By the time she started acting in films and television series, she was already a popular face in the industry.

Her successful career as a stage actress made it easy for her to penetrate the acting industry, so she transitioned to become an actress by appearing in various television shows such as Dark Justice, Grace Under Fire, Wings, Party of Five, The Big O and Significant Others.

In 2006, she got her big break when she landed the role of Diane Miller on the daytime television series General Hospital, a role she has been playing since then. Moving forward with her career, she had major roles in various television shows like Cougar Town, Jessie, True Blood, Revenge, and Lego Star Wars: All-Stars.

Apart from television roles, Carolyn has also had supporting roles in movies such as Terminator 3: Rise of the Machines, Legally Blonde 2: Red, White and Blonde, Click, The Heat Chamber, Cougar Club., Star Wars: The Rise of Skywalker and Fatal Affair.

Carolyn won the prestigious Natalie Schafer Award for Outstanding Comedic Actress in 2001, which was awarded by the Los Angeles Drama Critics Circle. She won an Ovation Award (a Los Angeles stage award) for Featured Actress for the play The Fan Maroo in 2004.

In 2016, Hennesy was named an American Humane Association celebrity ambassador and spoke before a congressional committee on the organization’s new humane conservation initiative

In 2017, she won the Daytime Emmy Award for Outstanding Supporting or Guest Actress in a Digital Daytime Drama Series for her work in The Bay.

She was featured as an “Actor’s Actor” in the industry publication Backstage-West.

She has published many children’s book based on the widely popular character called Pandora.

Carolyn is a trapeze artist

With so many accomplishments to her name, Carolyn Hennesy has been a role model for a lot of people. Since the beginning of her career, she has appeared in numerous titles and all of these appearances have only increased her wealth.

As of 2023, Carolyn Hennesy has an estimated net worth to the tune of $6 million.