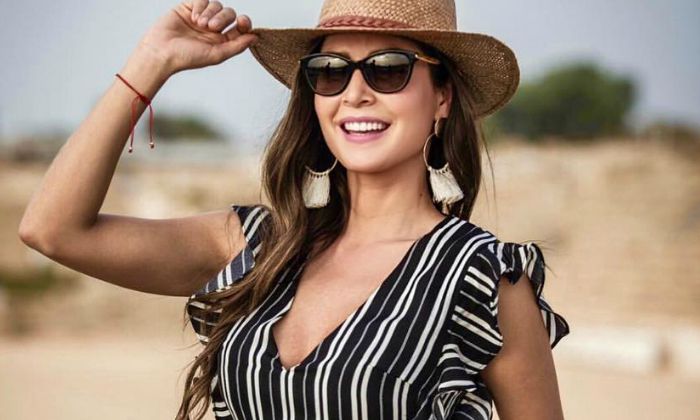 She was featured in People en Espanol’s “50 Most Beautiful” list in 2009. Carmen is incredibly popular on social media with more than 11 million people across the globe following her on Instagram.

Carmen Villalobos was born on the 13th of July 1983, in Barranquilla, Colombia. She is currently 39 years old.

Speaking about her family background, very little is known about her family, education, and childhood. Her parents are Pedro Villalobos and Betty Barrios. Information pertaining to her education is unknown as well. She studied acting at Fundación Teatral Julio Cesar Luna in Bogotá.

Carmen Villalobos rarely speaks about her personal life to the media. It is known that she had always managed to hide that aspect of her life from the public eyes.

She has been in a relationship with her longtime boyfriend and actor Sebastián Caicedo. The couple got engaged in August 2018 and married on October 18, 2019, in Cartagena, Colombia.

She got her start in the entertainment business as a host and actress on the popular children’s program ‘Club 10’ in 1999.

In 2003, she landed her first acting role as Nina in the RCN telenovela ‘Amor a la plancha’.

Carmen is best recognized for her work in telenovelas. She got her first major breakthrough in 2008 when she was offered to play the character of Catalina Santana, an ambitious young beautiful prostitute who seeks breast augmentation surgery to escape poverty in the telenovel ‘Sin senos no hay paraíso’. She received critical acclaim for her role which eventually landed her in several eminent lead roles in telenovelas.

The following year she was cast as Alexandra Garcia, a humble poor young girl forced to attend a “rich-kid” school where the students are wild and out of control in ‘Ninos Ricos, Pobres Padres’.

She was raised in Barranquilla, Colombia.

She has appeared in theater productions including ‘We’re leaving or we’re coming’ and ‘Taxis 2’.

Carmen bought a bed and a dresser from the salary of her first job as an actress.

Carmen is an accomplished dancer and loves dancing.

She won the Gaceta Award of Colombia as Best Actress Protagónica in 2009.

In 2017, Carmen won the ‘I’m Sexy and I Know It’ Award at the Your World Awards for her role in ‘Sin senos si hay paraiso’.

The thing that excites her the most is traveling. She wants to go on a road trip through Egypt and see the pyramids and learn about their fascinating history.