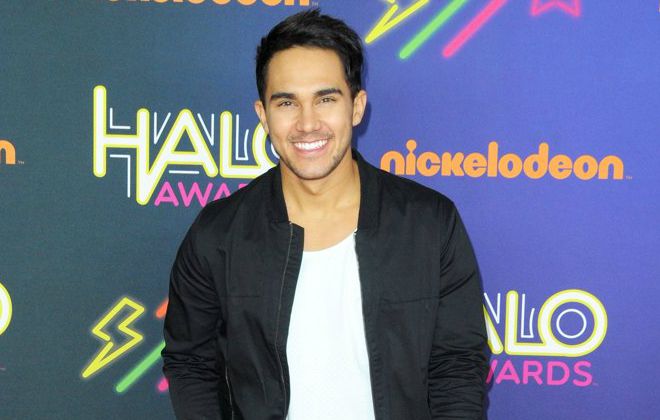 Carlos Pena Jr. is a well-known American actor and singer best known for his role in the Nickelodeon series Big Time Rush as Carlos García. He played Kenickie in the 2016 Fox broadcast of Grease Live. He has voiced the character Bobby Santiago on Nickelodeon series The Loud House since 2016 and is a series regular on The CW’s comedy sitcom Life Sentence. He was also a member of the band Big Time Rush.

Carlos is the son of Margarita Pena and Carlos Pena, Sr. He has three brothers Andres, Javi and Antonio Pena.

He is of Spanish and Venezuelan descent on his father’s side while his mother is Dominican.

He got enrolled at the American Heritage School in Plantation, Florida, but dropped out to pursue a career in acting and singing.

Carlos married actress Alexa Vega on January 4, 2014, in Puerto Vallarta, Mexico. Together, they have a son named Ocean King PenaVega, born on December 7, 2016. The couple welcomed their second son, Kingston James PenaVega, on June 30, 2019. Their third daughter Rio Rey PenaVega was born on May 7, 2021.

Carlos Pena, Jr made his onscreen acting debut in the 2011 movie Little Birds for his role as Louis.

In 2001, Carlos appeared in the NBC medical drama series, ER, playing Arlo Escobar in an episode titled “Shot in the Dark”.

He was one of the vocalists for the American pop boy band Big Time Rush that formed in 2009. Other members of the band are Kendall Schmidt, James Maslow, and Logan Henderson. They released their debut album BTR on October 11, 2010, via Columbia Records. The album charted at #3 on the US Billboard 200. Pena co-wrote the song “Oh Yeah”.

After the band stopped performing in 2014, Pena embarked on a solo career, releasing his debut solo single titled “Electrico” in Spanish on February 4, 2014. It achieved moderate success.

His role as Carlos García in the Nickelodeon series Big Time Rush from 2009 to 2013.

As of 2023, Carlos Pena, Jr. has a net worth of $8 million. He lives in Los Angeles with his family and possesses an Audi.

He was brought up in Western Florida.

Carlos had performed in musicals when he was studying in school like “Man of La Mancha”, “Grease”, and “Titanic”.

Carlos moved to Hollywood in August 2009.

He got his big break at the age of 10 when he starred in the popular American medical drama ‘ER.

He has a German Shepard named Sydney and also has 2 cats – Zero & Zira.

He and his wife together run a YouTube channel, LexLovesLos, on which they have almost 700k subscribers.