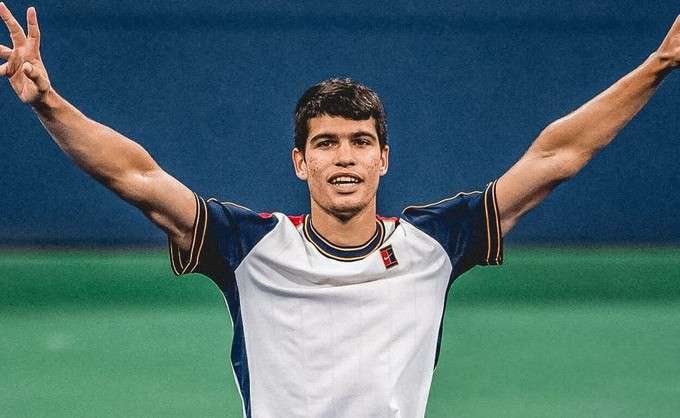 Carlos Alcaraz is a young and talented professional tennis player from Spain. At such a young age, he has accomplished a lot of things that only prove how passionate he is about the sport. He’s already on a path to stardom. Carlos made his ATP debut at the 2020 Rio Open and quickly rose through the ranks, becoming the youngest player to break into the Top 100 on 24 May 2021. He was just 18 years old.

The year 2021 has proved to be a turning point in his career that saw him win his first maiden ATP title by upsetting Richard Gasquet of France. At age 18, Carlos became the youngest ever player to reach the Grand Slam quarterfinals at the US Open, defeating world No 3 Stefanos Tsitsipas. He is now considered to be the happening star in the sports world who has won millions of hearts across the world. The Spaniard reached his career-high singles ranking of #38 in September 2021.

He has Spanish roots.

He is the son of former tennis player Carlos Alcaraz Gonzalez and his wfe Virginia Garfia. His father inspired him to take up the sport at a tender age. He began playing tennis at the age of 4 and was trained by his father before being trained by the former world number one Juan Carlos Ferrero.

While there’s a lot of information about Carlos’ professional career due to his popularity, there’s apparently none concerning his love life. He’s likely single as there are no credible sources to prove that he’s in a relationship.

At the age of 16 years old, Carlos began his international career at the 2020 Rio Open beating another Spanish player Albert Ramos Vinolas. The tour was later suspended due to the COVID-19 outbreak.

At 17, he became the youngest player to get selected for the main draw of the Australian Open and own his Grand Saml debut defeating Dutch player Botic van de Zandschulp.

He continued his success and registered his first win at the Madrid Open’s history, defeating Adrian Mannarino. With this win, he broke the previous record set by fellow countryman Rafael Nadal (he achieved it at the age of 18) and became the youngest champ to win a match in Madrid Open’s history.

On July 25, 2021, he became the youngest player to win an ATP title on tour defeating Richard Gasquet. He reached the first-ever Grand Slam quarterfinal at the Us Open 2021, beating world No. 3 Stefanos Tsitsipas. But, he lost to Félix Auger-Aliassime in the quarterfinal.

Carlos Alcaraz Earnings and Net Worth

Undoubtedly, Carlos is one of the young richest tennis players in the world. As of September 2021, he has won over $1 million in prize money in singles and doubles combined. According to various sources, Carlos Alcaraz’s estimated net worth sits at $1.5 million.

He made his ITF Futures debut in July 2019 followed by his ATP Challengers Tour debut in 2020.

Carlos is coached by Juan Carlos Ferrero, the former world No 1 and 2003 Roland-Garros champion.

He achieved his career-high ranking of world number 38 in singles on September 13, 2021.

He injured his leg in his first-ever quarterfinal at the US Open 2021 that forced him to retire from the match. The opponent Félix Auger-Aliassime was declared the winner of the match.

In his free time, he likes to play golf and football.

Carlos has own 4 ATP Chahlenger Tour and 3 ITF Futures Tour, as of September 2021.