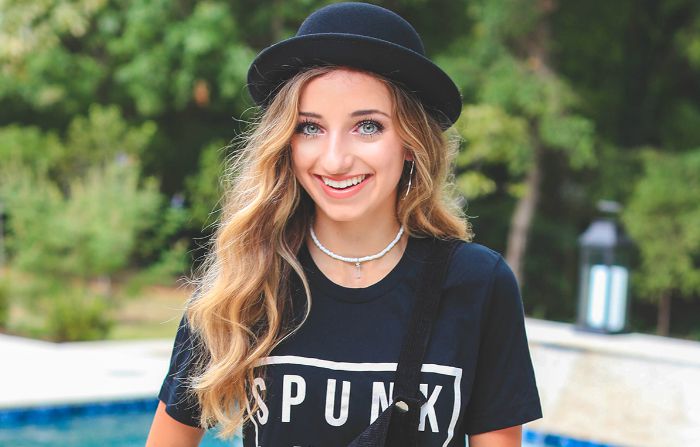 Brooklyn McKnight is a popular American YouTuber and singer from a family of Vloggers. Her twin sister Bailey McKnight and her mother Mindy McKnight are already famous as social media stars. She rose to fame when she was a toddler along with her twin sister after they featured on their mother’s channel, as a part of the “Cute Girls Hairstyles” series. Her popularity subsequently skyrocketed after she created a collaborative YouTube channel, “Brooklyn and Bailey”  with her sister Bailey, which has over 6.7 million subscribers to date.

Brooklyn McKnight was born on the 31st of December 1999, in Utah, United States of America. She’s currently 22 years old.

Brooklyn McKnight is the daughter of Shaun and Mindy McKnight. Her mother is also a YouTube personality, who actually inspired her to become an internet celebrity.

She has a twin sister, Bailey McKnight with whom she makes collaborative videos and vlogs. In addition, Baily has two sisters, Kamri Noel and Rylan McKnight, and an adopted brother named Daxton as well as an adopted sister Paisley.

After completing high school, she joined the Baylor University in Waco, Texas, where she’s studying business.

Brooklyn began dating Parker Johnson in 2016. They ended their relationship in September 2017.

Brooklyn McKnight made her onscreen debut in 2008 with the comedy-drama movie, The Adventures of Food Boy.

Brooklyn made her first television appearance as a special guest on Studio C.

Brooklyn and her twin sister released their debut single, Dance Like Me on March 3, 2017, through  Benny Cassette, a music producer attached to Kanye West’s GOOD Music label. The single debuted at no.11 on the Pop Charts and its corresponding music video has garnered more than 6 million views on YouTube.

Best known for their YouTube channel which has over 5 million subscribers and their stint in showbiz.

Brooklyn has done endorsement work for Lash Next Door and Too Faced Cosmetics. In addition, she and her twin sister monetize their popularity on social media by promoting brands and products.

Brooklyn McKnight’s net worth is estimated to be $800 thousand dollars.

Her mother started making creative hairstyles for her and her twin sister when they were just 18 months old.

She is 2-minute older than her twin sister Bailey.

The twins have won the 2017 People’s Voice Webby Award for the Best Social Celebrity.

They have been featured in People Magazine’s VidCon coverage of top creators.

In August 2015, Brooklyn and Bailey had previously collaborated with Peter Hollens for a cover of Lennon and Maisy’s “A Life That’s Good.”

The identical twin sisters created their own channel, Brooklyn and Bailey in November 2010, where they post family vlogs, crafting, fashion, and beauty videos. The channel has accumulated over 5 million subscribers. The sisters also run their second called Squared which features a number of other twins.

They have worked with several major brands like Disney, CoverGirl, Clinique, JCPenny’s, Hollister and many others.

Brooklyn and her sister Bailey were featured in Business Insider’s “13 up-and-coming YouTube stars you should be following” list.

They were named Champions of the UN Foundation’s Girl Up Initiative, which advocates for the education, health, and safety of girls across the world.

Brooklyn was included in Forbes list of Top influencers in 2017.

The twins launched their own mechanize line in 2017 that offers a wide range of clothing and beauty products.

They have two dogs named Braidy and Ash.

Brooklyn has been featured on the Anderson Live daytime talk show, hosted by Anderson Cooper.