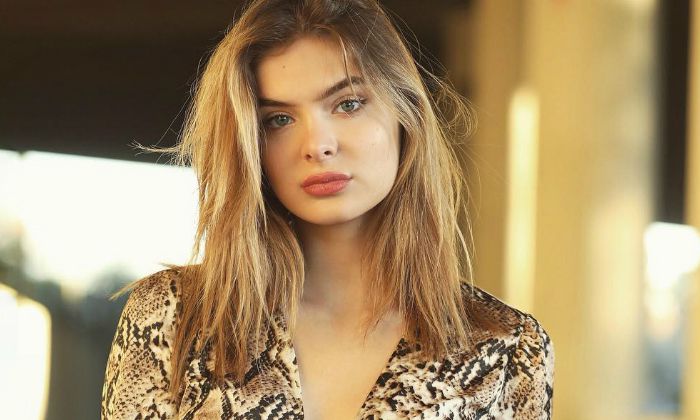 Brighton Sharbino is an American actress who is probably known for her portrayal of Lizzie Samuels on the AMC horror television series ‘The Walking Dead’. She has been into acting ever since she was six years old and proved her mettle as an actress with a variety of roles along the way.

She has done a lot of guest roles in hit television series like ‘Hannah Montana’, ‘NCIS’, ‘True Detective’, and ‘Once Upon a Time’. In addition, the young and beautiful looking blonde has appeared in over a dozen movies including ‘The Death of Socrates’, ‘Cheap Thrills’, ‘Miracles from Heaven’. and ‘Urban Country’.

Brighton Sharbino was born on the 19th of August 2002, in Flower Mound, Texas, United States of America. She is currently 19 years old.

Brighton Sharbino is the daughter of Angela and Ron Sharbino. She has two siblings, an older sister, an actress named Saxon Sharbino, and a younger brother named Sawyer Gregory Sharbino, who is also an actor.

Her father is of Cajun French, English, Scottish, German, and 1/16th Danish/Greenlandic descent while her mother has English and German roots.

For education, Brighton joined K12, an online school, after middle school since she couldn’t able to manage both studies and acting simultaneously.

Brighton is currently single and has never been married as she is still in her teenage years. She is quite reluctant and rarely opens about her private life. Furthermore, she has keenly managed to keep her personal life away from the spotlight and it looks like she is very much focused on studies and acting.

Brighton Sharbino got her start in television in 2008 and two years later, she landed a role in a short film called ‘Changing’. In 2013, she scored her major role as Luann in a black comedy called ‘Cheap Thrills’.

Sharbino earned her first television credits as an emotional fan on an episode of the drama television series ‘Friday Night Lights’.

As an actress, Brighton’s early works include minor roles in both television shows and films. She was cast in a number of guest roles on television shows until her breakthrough appearance came in the form of a recurring role in the post-apocalyptic horror television series The Walking Dead.

Brighton played the role of Lizzie Samuels, which is a recurring role in season 4 and a guest role in season 5. She appeared in a total of 10 episodes between 2013 and 2015.

She fell in love with acting at a young age and told her mom that she wanted to be on TV.

She used to be a competitive cheerleader in school.

Since her siblings were already into acting, her parents gave her a green signal when she decided to pursue acting. They are highly supportive of her career.

Brighton enjoys playing the piano in her free time.

She is a bookworm and reads a lot of books whenever she gets time. Some of her favorite books include the Harry Potter books, Percy Jackson & the Olympians, Hunger Games, Doctor Who, and The Mortal Instruments.

She has a sweet tooth.

Though she had played several roles in both films and television shows, it is none other than the role of Lizzie Samuels on The Walking Dead that pushed her acting career.