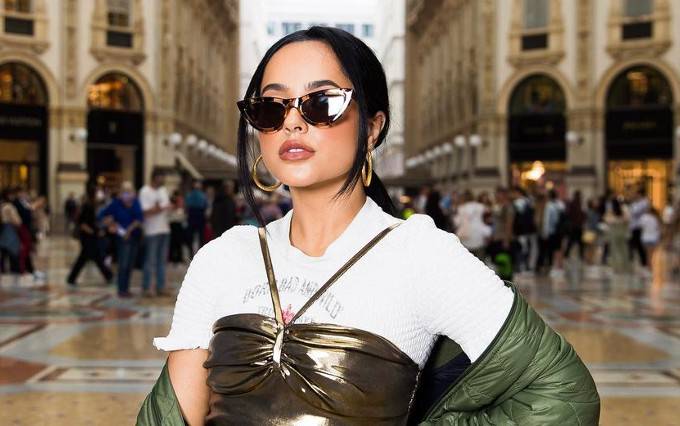 Becky G is the most popular and renowned American singer, rapper, and songwriter. Her original name is Rebbeca Marie Gomez. Like other young internet stars, she first garnered fame and reputation through her online music videos, which she posted on YouTube. Subsequently, one of her videos caught the attention of producer Dr. Luke who signed her. Even though, she received positive acclaim with her debut single, ‘Becky from the Block’ she achieved meteoric stardom status with the single, ‘Shower’ in 2014. It was her first song to peak in the top twenty of the Billboard Hot 100 in the United States. Since then, she has dropped several singles and EPs and also portrayed the Yellow Ranger, Trini, in the 2017 film Power Rangers.

Becky G was born on the 2nd of March 1997, in Inglewood, California. She had a difficult childhood due to poverty and during her teens, she did several jobs to support her family. She is currently 24 years old.

Becky is the daughter of Alejandra “Alex” Gomez and Francisco “Frank” Gomez. She has three siblings: Frankie, Alex, and Stephanie Gomez.

Becky G received her primary education from a local public school, but she then opted for homeschooling due to extensive bullying. As things gone worse, she left her studies and started to work to support her family financially.

Becky G first released her single “Becky from the Block”  in 2013 and later she released her debut extended play, Play It Again in the same year.

She received worldwide fame with the single “Shower” which was released in 2014, received several platinum and gold certificates from the Recording Industry Association of America (RIAA), and reached the top twenty on the Billboard Hot 100 in the United States.

Her first prominent role came when she played the role of Trini/Yellow Ranger in the 2017 film Power Rangers.

In 2008, she appeared in a television film, La estación de la Calle Olvera for the role of Nina.

She has been the face of McDonald’s, CoverGirl, and others.

Having earned the likes of millions of fans for her singles and her extraordinary onscreen persona, Becky G has an estimated net worth of $7 million. Her net worth skyrocketed over the years with her increasing popularity and her demand in the music world. Singing, acting, and endorsement deals are the primary source of her fortune, she is still in her early 20s and has been working on many projects currently.

She lives in her own luxury pad in her hometown. She owns a Chevy Camaro.

During her teens, she did many part-time gigs like commercials and voiceover work to support her family.

Her music career took off when record producer Dr. Luke perceived one of her videos and immediately offered her a joint record deal with Kemosabe Records and RCA Records.

She is a huge fan of Justin Bieber and Justin also becomes her fan after watching the remix of “Die Young”.

Becky was recently honored by her home city of Inglewood, California for contributions to the Hispanic community, including “We Are Mexico,” a song Becky released in response to Donald Trump’s remarks against illegal Mexican.

She was recognized as one of Rolling Stone’s “18 Teens Shaking Up Pop Culture”.

In December 2018, she launched her own makeup line called “Salvaje” in association with the cosmetics brand ColourPop.

Becky appeared in a remix of “Mala Mía” by Colombian singer Maluma, alongside Brazilian singer , which was released on December 20, 2018.

She had an obsession to make a career in the fashion industry from an early age, but as she grew, she took music as her full-fledged career.

She released her second album entitled Esquemas on May 13, 2022, which peaked at no.1 on the US Latin Pop chart.