Ashley Randermann is an American chiropractor, equestrian, and reality TV star who came to the limelight when he appeared on the 3rd season of Netflix’s hit dating reality show Love is Blind. Ashely is one of the singles to be featured on the Nick and Vanessa Lachey-hosted social experiment dating show where singles like her enter the show with hopes to find love and get engaged. A graduate of Parker University. Randermann specializes in pediatric and animal care and started private practice back in May with Living Well Adjusted.

Ashley Randermann was born in the year 1993

Very little is known about Ashley’s life prior to her fame with Love is Blind. Her parents are Randy the Rander Mann and Ranell Goessler. She has two brothers, Alex and Gary.

Ashley earned her Bachelor of Sciences degree from Texas A&M University in 2015. After that, she enrolled at Parker College of Chiropractic in September 2015 to study Doctor of Chiropractic. She graduated from Parker in December 2019 and obtained her Master’s degree from the same university.

Ashley is from Dallas, Texas.

Growing up, she trained in horseback riding and participated in several equestrian sports.

Ashley worked with Living Well Adjusted and in November 2021, she joined Parker University as an Adjunct Clinic Doctor. 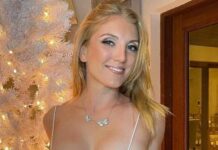