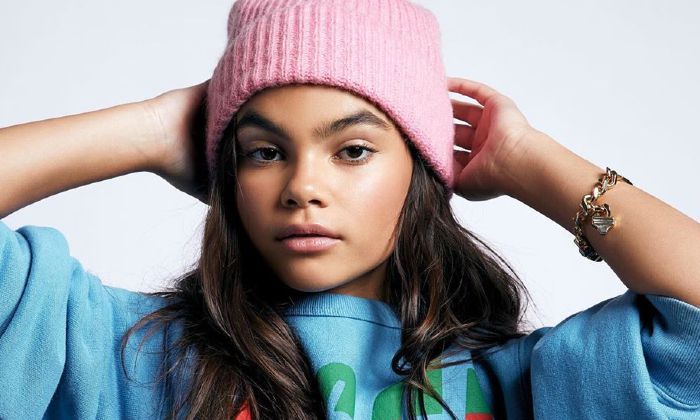 Ariana Greenblatt is an American actress who came into the limelight for her portrayal of Daphne Diaz on the popular Disney series Stuck in the Middle starring Jenna Ortega and Isaak Presley. The New York native is certainly on the rise and has already proved her acting prowess with A Bad Moms Christmas starring alongside Mila Kunis and Kristen Bell as well in the film Avengers: Infinity War, in which she played Young Gamora.

In 2018, she appeared in the inaugural season of Dancing with the Stars: Juniors. The young beautiful actress has already became a familiar face on screens that has literally transformed into a huge following on social media, especially on Instagram, where she has over 1.4 million followers.

Ariana Greenblatt was born on the 27th of August 2007, in New York, United States of America. She’s of Puerto Rican descent. Not much is known about her parents except that she grew up along with her older brother, Gavin Greenblatt. She’s very close to her brother.

The family resided in Parkland, Florida until she was seven years old, and then moved to Los Angeles when she landed the role of Daphne Diaz in Stuck in the Middle. She has been in Los Angeles since then. She got an interest in Broadway at an early age, and with the support of her parents, she started giving auditions for both TV series and films in early middle school. Thanks to her good looks and charming personality, she booked a part in liv and Maddie.

Ariana Greenblatt is barely 14-years-old, and taking her age into account, it’s highly unlikely that she’s entered the world of dating. There are no details to confirming the existence of a potential significant other, the chances of her having a boyfriend are slim at best. Even if there was a boyfriend, her parents are doing an exceptional job of protecting her private life from the public eye.

Ariana Greenblatt was just six years old when she got the role of Raina in the TV series Liv and Maddie. It didn’t take long for her to get on the radar and landed her first major role of Daphne Diaz in the Disney TV series Stuck in the Middle.

She then played Lori in the film A Bad Moms Christmas starring Mila Kunis and Kristen Bell, her first acting gig on the big screen. She continued to secure roles in major productions including Avengers: Infinity War and Scoob.

Her most recent acting accomplishments include The One and Only Ivan, in which she co-starred with Bryan Cranston, Sam Rockwell, and Angelina Jolie, and then played Minnow in Love and Monsters opposite Dylan O’Brien, Jessica Henwick, and Michael Rooker.

Ariana Greenblatt has a number of movies in her belt including Awake, In the Heights, and The Boss Baby: Family Business, which are in different stages of post-production.

Given the fact that she has just forayed into the entertainment industry, the net worth of Ariana Greenblatt has not been revealed to the public.

She was named ‘One to Watch’ on The Hollywood Reporter’s ‘2019 Young Hollywood list.