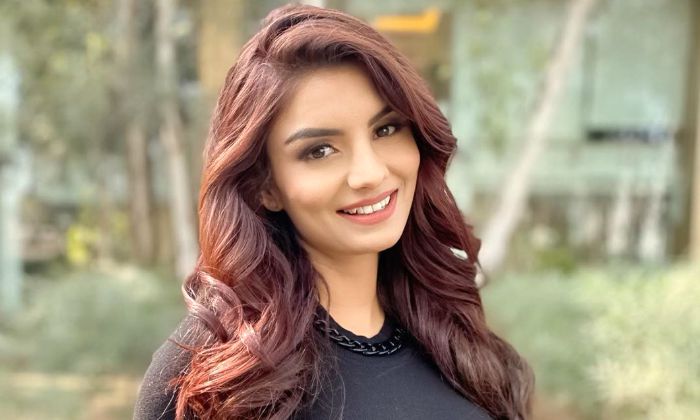 Anveshi Jain is an Indian actress, model, television host, and motivational speaker who rose to fame for her portrayal of Neeta in the AltBalaji original series Gandii Baat Season 2 in 2018. She played the character named Megha in an Indian web series called BOSS: Baap of Special Services.

In addition, Anveshi has hosted a number of live shows, talk shows, and corporate events. Besides all this, she is also a social media influencer with over 1.6 million Instagram followers, thanks to her extremely gorgeous looks and attractive body measurements.

Anveshi Jain was born on the 25th of June 1991, in Khajuraho, Bundelkhand, Madhya Pradesh, India. She is currently 30 years old.

While not much is known about her immediate family, Anveshi grew up along with her brother Pranjal Jain.

She attended Rajiv Gandhi Proudyogiki Vishwavidyalaya (University of Technology of Madhya Pradesh) in Bhopal, Madhya Pradesh, where she majored in Electrical and Electronic Engineering.

Now, this is the topic that most of you are probably looking forward to. Well, we are sorry to say that there is not a lot we have to share regarding the personal affairs of Anveshi. She has tried to keep things away from the media to the best of her abilities. Moreover, Anveshi is currently focusing on her career and has very little time for romance.

Anveshi Jain made her feature debut with the 2020 Gujarati film titled “G.” where she played the lead role of Vidhya.

Though she has not yet starred in a television series, she played a minor role named Neeta in AltBalaji’s original series Gandii Baat Season 2 in 2018. This marked her debut in the OTT platform that eventually brought in her a lot of fame and recognition.

She is quite active on different social media platforms, especially on Instagram, where she has cultivated over 1.6 million followers. Though she had been modeling a while ago, she only had a decent amount of followers on the photo-sharing app, however, Anveshi’s followers’ count skyrocketed in no time after her appearance on Gandii Baat Season 2.

Although Anveshi’s exact net worth is not known, she’s earning quite a lot of money from film and television appearances and not to mention the money she earns from lucrative endorsement deals and sponsorships.

After graduating from college, she worked for a while before quitting her job and moved to Mumbai without telling her parents to pursue a career in acting.

Though she destined to be an actress, it wasn’t easy for her to make her dream come true and landed on various odd jobs including an event hostess among other profiles.

Anveshi has hosted a number of live shows, talk shows, and corporate events.

She has also been into modeling and has been the face of many lifestyle brands.

She runs a YouTube channel under her name which she uses it to engage and interact with the legion of her fans. Jain mostly does live streaming to let fans know what they want to know about her and also gives a lot of life advice.

She had her first kiss with a guy whom she dated during her college days.

She has been in a few relationships in the past but she is very shy to talk about it.

Anveshi launched an eponymous mobile app in late 2019, on which she shares her music videos and blog posts, as well as health, wellbeing, and relationship tips and tricks.