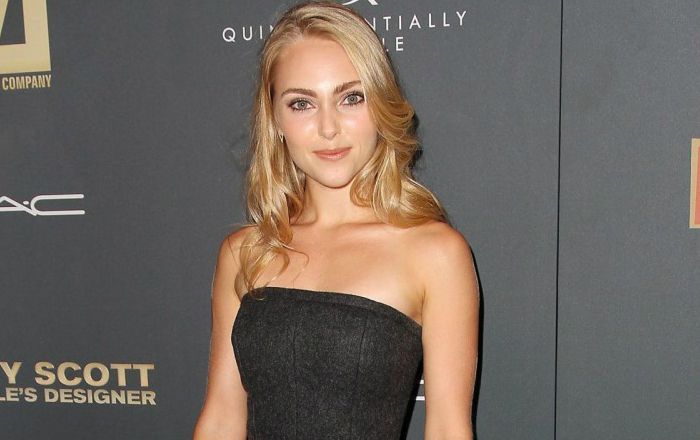 AnnaSophia Robb is an American actress and singer who caught attention after playing the lead role of Carrie Bradshaw on The CW’s series ‘The Carrie Diaries’. She is one of the emerging talents in Hollywood who has proved herself with her stupendous acting in both television and films. She first gained fame for her role as Violet Beauregarde in ‘Charlie and the Chocolate Factory’ and went on to win the likes of audience with her powerful performances in ‘Because of Winn-Dixie’, ‘Bridge to Terabithia’ and ‘Soul Surfer’.

AnnaSophia Robb was born on December 8, 1993 in Denver, Colorado, USA.

She is of English, Danish, Scottish, Irish, and Swedish descent.

Robb attended Arapahoe High School in Centennial, Colorado and graduated in 2012. She later enrolled herself at the New York University, graduating in 2018.

AnnaSophia Robb has been in a relationship with her The Carrie Diaries co-star Chris Wood from 2013. It is a kind of On-and-Off relationship, as they parted ways in 2014 after dating for few months. The duo reconciled in 2017, and since then, their relationship goes stronger every passing day.

She was in a relationship with Adam Cobb during their split from 2014 to 2016.

AnnaSophia Robb made her on-screen debut in 2005 in the family comedy-drama, ‘Because of Winn-Dixie’, a film based on Kate DiCamillo’s 2000s book of the same name. She played the protagonist Opal opposite Jeff Daniels in the film.

The same year, she also starred as the gum-chewing Violet Beauregarde in Tim Burton’s ‘Charlie and the Chocolate Factory’, in which she stars opposite Johnny Depp

Her television debut came in 2004, when she landed a small role as Liza in the series ‘Drake & Josh’.

Following  that, she did her first major role as the title character of the television film ‘Samantha: An American Girl Holiday’  for Warner Bros.

Though she has appeared in many films and television shows, her portrayal of Leslie Burke in ‘Bridge to Terabithia’ is still considered as her best work in her career. Her performance was in the film highly praised by critics. The movie was a huge success and received a number of awards and nominations.

She is also best known for portraying the lead character of Carrie Bradshaw in the television series ‘The Carrie Diaries’.

The young talented actress has a net worth of $8 million. She earned her net worth through her career in films and TV.

Since her childhood, Robb aspired to become an actress and performed on a church stage in her home town when she was just 5 years old.

She didn’t stop with that and took various acting course at age 8, and was scouted at the age of 9 by an agency in Los Angeles.

She drove down to LA with her mom, and several auditions, AnnaSophia won her first national commercial, advertising Bratz dolls. She became unstoppable thereafter.

She has a dog named Bella, who is a cross between a Maltese and a poodle.

AnnaSophia is a huge fan of the The Black Eyed Peas. Some of her favorite songs by them are “Hey Mama”, “My Humps”, “Pump It”, and “Where Is the Love?”.

AnnaSophia Robb is a philanthropist who has been involved with a number of charitable organizations since she was very young. She has worked with ‘Save the Children’ initiative, the education program ‘PeaceJam’, and even travelled to India to volunteer for ‘The Dalit Freedom Network’.

She got trained in dance and gymnastics for four and a half years.