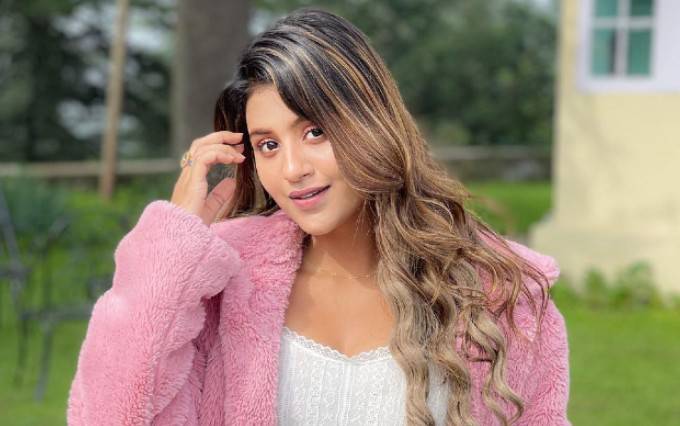 Anjali Arora is an Indian actress and model who reached prominence after her dance performance to the song Kacha Badam went viral on social media. She has been on the online game for a while now. The 22-year-old has already taken over social media with her bubbly dance videos and charming photos. Thanks to her extensive presence on Instagram, Anjali has already gotten over 11 million followers. Not only on Instagram, but she also has gained a massive following on other social media platforms. On YouTube, her subscriber count is nearly 300 thousand, and her TikTok follower count has grown to nearly 10 million followers.

Besides being a social media influencer, Anjali Arora has also taken a stab at acting. She has acted in several short films and got featured in many music videos including Oh Humnasheen, Shayad Fir Se, Ishq Lagan, and Kaka: Temporary Pyar. in 2022, she gained further recognition when she appeared as a contestant on the reality show Lock Upp.

Anjali’s parents are Ashwani Arora and Shelly Arora. She has an older brother named Vansh Arora, who is married to Aarti Arora, a content creator.

Anjali completed her formal school education at Guru Harikishan Public School and then attended Deshbandhu College, which is affiliated with Delhi University for her graduation.

It appears that Anjali Arora has no visible romantic ties with anyone right now. She became obsessed with Munawar Faruqui, a rapper, writer, and comedian, on the Lock Upp show. She even went on to propose to him in front of the camera, but everything fell apart when she came to know that Munawar was already married and had a son.

TikTok has put a smile on tens of thousands of creators who have made a career out of it. Anjali Arora is one such creator who is famous in her own right, thanks to her good looks, infectious smile, and charming personality. She shares her talent with the world by posting dance videos and otherwise engaging content to her @anjumaxofficially account which has nearly 10 million followers.

She joined Instagram in 2019. Thanks to her already massive following on TikTok, which helped her reach millions of followers on the fly. With more than 11 million followers on Instagram in addition to millions of followers across various social media platforms, Anjali Arora is certainly ruling the social media. Her following grew exponentially after she posted a dance rendition to the hit song ‘Kacha Badam’ by Bhuban Badyakar, a peanut seller in West Bengal.

She was born into a Punjabi family and was raised in New Delhi, Delhi, India.

She became interested in modeling at a young age and started modeling as a teenager.

Anjali has appeared in a number of Punjabi music videos such as Paune 12, Temporary Pyar, Ashiq Purana, and Shayad Fir Se, among many others.

She can speak fluent Hindi, Punjabi, Haryanvi, and English.

In 2020, she appeared in a music video for Raman Goyal Ft. Yuvraaj Hans’ SUPNA.

Her earliest Instagram post dates back to May 11, 2019. It was a family photo snapped at Gurudwara Shri Bangla Sahib, New Delhi.

Anjali adds a bit of glam to the pictures that she uploads to Instagram and she reached a landmark of first million followers in September 2020.

She owns a Kia Sonet car.