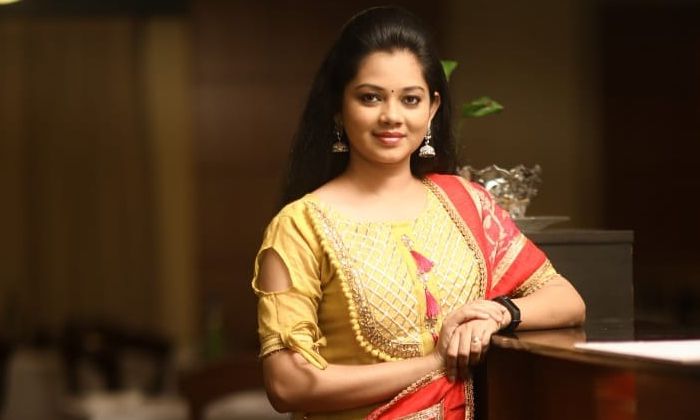 Anitha Sampath is an Indian television personality, news anchor, and actress who currently works for Sun News as a news anchor and also can be seen hosting various programs like Vanakam Thamizha on Sun TV. She has been a part of various films such as Gala, 2.0, Kaappaan, Aditya Verma, and Danny. Anitha runs a YouTube channel called Anithasampath Vlogs which has over 350 thousand subscribers.

She’s also a hit on Instagram, where she’s got more than 600 thousand followers. In 2020, she appeared on Kamal Haasan-hosted reality show, Bigg Boss 4.

Anitha Sampath hasn’t shared a lot of details regarding her family, education, and early life. She was raised by her parents in her hometown in Chennai. Other details including her parents and siblings are not known yet.

For her education, she attended Velankanni Matric Higher Sec. School, and after matriculating from high school, she enrolled at Anna University, from which she obtained her Bachelor’s Degree in Electronics and Communication Engineering.

When it comes to her personal life, Anitha Sampath married her longtime boyfriend Prabha Garan in a simple ceremony that held on August 25, 2019 in Chennai, with family and friends in attendance. Prabha is a graphic designer and artist. The duo has been dating for the last three years since September 2016.

Anitha Sampath started her career as a news anchor at Sun News channel, and after spending a few years in that position, she went on to host special programs and morning shows like Vanakkam Thamizha.

Over time, she become extremely popular and well liked among people who watch her daily on the small screen. Being talented and passionate, she carved a niche for herself in the television space that eventually led to major gigs. She has hosted audio launch of movies with big names like Sarkar, Kaala, Varma and 2.0, among many others.

Her work on television as well as her public events put her in the spotlight. While enjoying great success on television, she launched her YouTube channel called Anithasampath Vlogs in September 2019, on which she covers various lifestyle topics such as beauty, makeup, fashion as well as offers a glimpse into her personal and professional life. Her channel boasts nearly 350 thousand subscribers.

Besides all her accomplishments, she has also appeared in a handful of movies, playing small roles, mostly news anchor. Her film credits include Gala, 2.0, Kaappaan, Aditya Verma, and Danny.

Having already achieved a tremendous amount of popularity, Anitha Sampath became a part of the Tamil-language reality show, Bigg Boss 4, which is hosted by actor-turned-politician Kamal Haasan. Other contestants include Suresh Chakravarthy, Gabriella Charlton, Samyuktha Karthik, Shivani Narayanan, Sanam Shetty, and many more.

Being a television personality, it is quite usual to be active on social media. Thanks to her charming personality and good looks, she’s has a huge online presence, with over 600 thousand followers on Instagram and nearly 85 thousand Twitter followers.

Prior to joining Sun Network, she worked for Polimer News and News 7 Tamil.