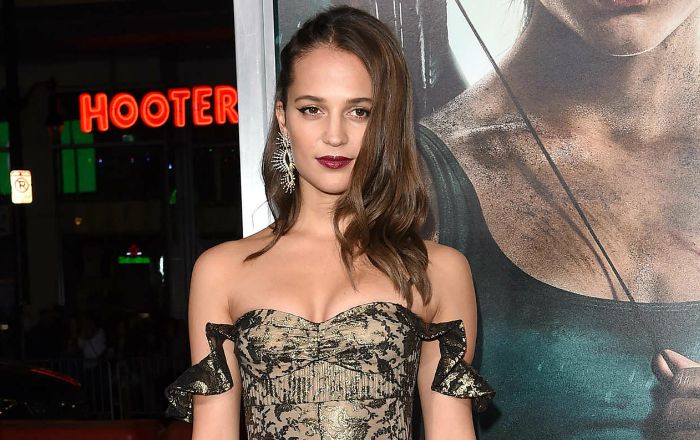 Alicia Vikander is a Swedish actress who gained popularity after the portrayal of Kitty in Joe Wright’s Danish film A Royal Affair. She won several awards including the Academy Award for Best Supporting Actress for her role as Gerda Wegener in The Danish Girl, the film which made her known to the international audience. She also portrayed activist Vera Brittain in Testament of Youth, a humanoid robot in Ex Machina, and Lara Croft in the adventure film Tomb Raider.

Alicia Vikander is the only child of parents Maria Fahl Vikander, a stage actress, and Svante Vikander, a psychiatrist. She is of Swedish and one-quarter Finnish descent.

She explored her love for acting at a very young age and because of her busy schedule, she couldn’t able to get a proper education. Alicia began studying ballet when she was 9 at the Royal Swedish Ballet School in Gothenburg and was later admitted to an upper-level dancing school in Stockholm. She also took ballet training from the School of American Ballet in New York.

Alicia Vikander married actor Michael Fassbender on 14 October 2017, in a private ceremony in Ibiza, Spain. They first met during the filming of the movie The Light Between Oceans and soon they fall for each other. They made their first public appearance together at the 2016 Golden Globes.

Alicia Vikander started her acting career appearing in Swedish short films and television roles. She made her on-screen debut in the 2010 Swedish drama film Pure for her role as Katarina.

In 2002, Vikander was cast as Ebba Du Rietz in the Swedish television film Min balsamerade mor. Her first work as an actress in any television series was as Tony in the 2005 Swedish TV series En decemberdröm. She acted in a total of 13 episodes.

She was cast in the breakthrough role of Jossan Tegebrandt Björn in the Swedish drama series Andra Avenyn from 2007 to 2008.

She was the face of Louis Vuitton for their Fall / Winter 2015 collection.

Her parents separated when she was two months old and was raised by her mother.

At seven, Alicia started acting in stage productions, and her first being the Kristina från Duvemåla at The Göteborg Opera.

She appeared in several musicals at the Opera, such as The Sound of Music and Les Misérables.

Several years of her ballet training came to an end when she was 16 following a few injuries and subsequent surgeries. She later realized that dancing is not her cup of coffee and focused on acting.

Alicia was named as one of the European films’ Shooting Stars by European Film Promotion in 2011.

She was so close to bagging the role of Snow White in Snow White and the Huntsman. She took auditions many times and even sent to Los Angeles for screen-test, but it went to Kristen Stewart.

Alicia was considered for the lead female roles in both Assassin’s Creed (2016) and The Circle (2017) but she opted out to do Jason Bourne (2016) instead. She was replaced by Ariane Labed in “Assassin’s Creed” and by Emma Watson in “The Circle”.

She was auditioned for the role of Cinderella in Cinderella (2015) but it went to Lily James.

Vikander identifies as a feminist.

In an interview, Alicia stated that she did most of her own stunts, and had to repeat some of them, in Tomb Raider.