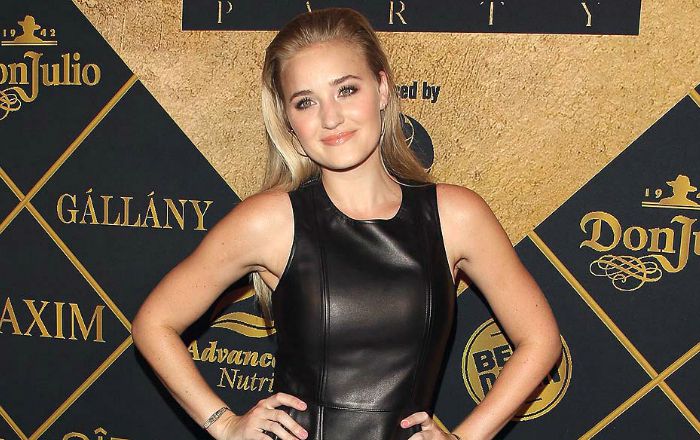 AJ Michalka is a famous actress and musician best known as one-half of the duo Aly and AJ with her sister Aly Michalka. As an actress, she is best known for her role as Lainey Lewis on the ABC sitcom The Goldberg. She voiced the character Stevonnie in the popular television series Steven Universe on Cartoon Network.

Amanda Michalka was born on the 10th of April 1991, in Torrance, California, United States of America. She is currently 31 years old.

Amanda attended Mack Elementary before enrolling in a homeschooling program.

She is currently in a relationship with actor Josh Pence.

AJ Michalka earned her first acting credits as Courtney Callum in the television film ‘Cow Belles’ in 2006. She played alongside her sister in this Disney Channel Original Movie.

Her feature film debut came in 2009 with an American supernatural drama film, ‘The Lonely Bones’, in which she played the role of Clarissa.

In 2002, Amanda made her first television appearance as Sheridan’s daughter in NBC’s soap opera Passions in just a single episode.

AJ along with her sister Aly Michalka released their debut studio album ‘Into the Rush’ on August 17, 2005. The album debuted at number thirty-six in the United States and sold over 839,000 copies in the United States and 1,000,000 worldwide, which was later certified Gold by the RIAA. The album earned them the “Contemporary Inspirational Artists of the Year” nomination at the 2006 American Music Awards

The duo has released three studio albums so far, including ‘Acoustic Hearts of Winter’, ‘Insomniatic’, and the aforementioned debut studio album, ‘Into The Rush’.

Her portrayal of Lainey Lewis on the ABC sitcom The Goldbergs since 2013.

She is best noted for her work as Grace Trey in the 2013 Christian drama film ‘Grace Unplugged’, which earned her a Movieguide Awards for Most Inspiring Performance in Movies.

She lends her voice to the character Stevonnie in the popular television series Steven Universe on Cartoon Network. In 2017, she won the Behind the Voice Actor Awards for Best Female Vocal Performance in a Television Series in a Guest Role.

As of 2023, AJ Michalka has an estimated net worth of $1 million dollars.

Amanda has been playing piano since she was four years old. She can also play acoustic & electric guitar.

She started acting at a very young age in Church productions.

She and her sister Alyson have three dogs, Bandit, Roadie, and Willow.

From 2002 to 2004 she starred as Shannon Gressler in the TV series The Guardian.

Her hobbies include dance, cooking, horseback riding, mountain biking, reading, and hanging out with her dogs.

In 2011 she had a recurring role on the series Hellcats as Deirdre Perkins.

In 2004, she along with her sister Amanda formed a band entitled Aly & AJ. In 2017, the sisters returned with a new single titled “Take Me,” after a 10-year hiatus.