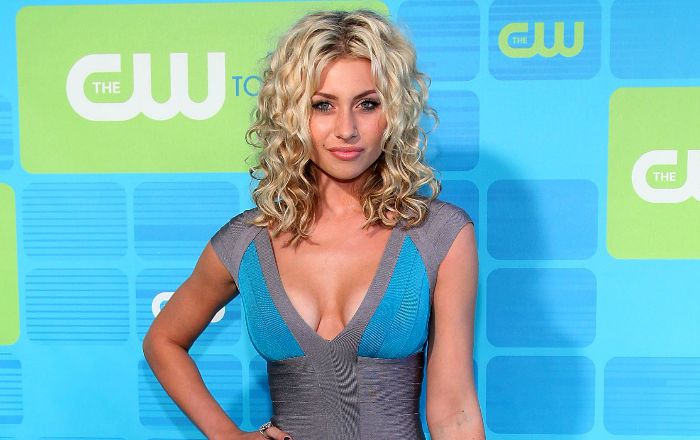 Aly Michalka is an American actress and musician who is immensely popular for her role as Keely Teslow in the Disney Channel series Phil of the Future. She played Rhiannon Abernathy in the film Easy A and Marti Perkins on the CW series Hellcats.

Her notable acting credits include Bandslam, The Roommate, Grown Ups 2, Sequoia, The Lears and iZombie. As of 2022, Aly Michalka has a net worth of $2 million dollars.

Aly Michalka was born on the 25th of March 1989,  in Torrance, California, United States of America. She’s currently 33 years old.

Aly Michalka is the daughter of Mark Michalka and Carrie Michalka. Her father is a businessman, who owns a contracting company, and her mother is a musician and performed with the Christian rock band “JC Band”.

Her younger sister, Amanda Michalka “AJ”, is also an actress and musician. She also has a brother named Ricky Michalka. She was home-schooled.

Michalka began dating film producer Stephen Ringer in 2012, whom she met on the set of her film Sequoia. They got engaged in July 2014 at Big Sur, California, and married on June 6, 2015, in Portofino, Italy.

Aly Michalka made her acting debut in 2005 starring as Allyson Miller in Disney Channel Original Movie,  ‘Now You See It….’

She made her feature film debut in the 2009 musical and romantic comedy-drama film, ‘Bandslam’, in which she played the role of Charlotte Barnes.

In 2004, Michalka earned her first acting credits as  Keely Teslow on the Disney Channel’s Phil of the Future. She has acted in a total of 43 episodes from 2004 to 2006.

Aly along with her sister Amanda Michalka released their debut studio album ‘Into the Rush’ on August 17, 2005. The album debuted at number thirty-six in the United States and sold over 839,000 copies in the United States and 1,000,000 worldwide, which was later certified Gold by the RIAA. The album earned them the “Contemporary Inspirational Artists of the Year” nomination at the 2006 American Music Awards

The duo has released three studio albums so far, including ‘Acoustic Hearts of Winter’, ‘Insomniatic’, and the aforementioned debut studio album, ‘Into The Rush’.

Aly’s work as Keely Teslow in the American sci-fi comedy series, ‘Phil of the Future’ was highly praised by critics and earned her nomination for the Young Artist Awards Best Performance in a TV Series (Comedy or Drama) – Leading Young Actress.

Her role as Marti Perkins in the CW television drama Hellcats. It was about the lives of college cheerleaders.

Grew up in Seattle, Washington, Aly Michalka learned how to play the piano when she was five years old and the guitar at 13.

She started her acting career at the age of five in church play productions.

Her last name is pronounced Mish-AL-ka.

She has a dog, Bandit, and a puppy, Roadie.

In 2004, She, along with her sister Amanda formed a band entitled Aly & AJ.

She is a devout Christian.

In 2014, Aly won the MovieGuide Award for Most Inspiring Performance in Movies for her contribution to the soundtrack of the movie ‘Grace Unplugged’.

In 2017, she began playing Amy in the action-comedy web series, Ryan Hansen Solves Crimes on Television, which premiered on YouTube Red on October 25, 2017.