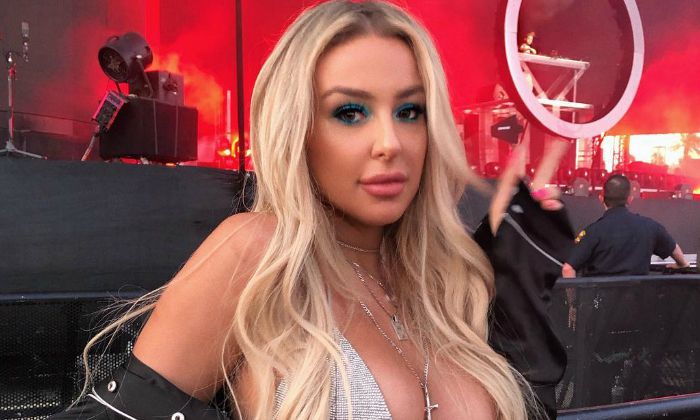 Tana Mongeau is an American YouTuber, social media personality, and rapper. Unlike other YouTubers, she posts “storytime” videos to her self-titled channel where she discusses fascinating, peculiar, and bizarre incidents that happened in her life. She also explores a lot of social-related things that make her stand out from the crowded space. Her YouTube channel has over 5.5 million subscribers, and, in addition, her Instagram page has garnered more than 5.8 million followers.

Tana Mongeau was born on the 24th of June 1998, in Las Vegas, Nevada, United States of America. She is currently 23 years old.

Tana Mongeau is the daughter of American parents Rebecca and Richard Mongeau, who owns a pool business. There are no details about her siblings. Her dad and mom have featured in one of her videos titled “My Parents React To Hefner Video (CRINGE).” Other than that, nothing is known about her family. There is no mention of her educational qualifications either.

Tana’s personal life has been subjected to widespread media attention due to her relatively long relationship with American actress and model Bella Throne. The two were romantically linked up together from the summer of 2017 to February 2019. Over the course of their intimate relationship, they both used to post a lot of pictures featuring them on Instagram and Bella had even appeared in the music video of her single, Hefner.

She had also dated fellow social media star Somer Hollingsworth from 2015 until 2017, rapper Lil Xan, and Brad Sousa from February to April 2019.

In April 2019, YouTuber Jake Paul and Tana began dating each other and it made it to the news after she posted a pic of her lying in Jake’s bed. Since then, they are going strong. She announced on her birthday of June 24, 2019, that she was engaged to her boyfriend Jake Paul. The couple married in July 2019 at a grand wedding in Las Vegas. The internet stars took to their respective Instagrams to announce their split in January 2020, just six months after their wedding.

In 2020, she had a fling with actress Francesca Farago.

Tana created a YouTube channel on April 30, 2015. She uploaded her first video titled “Hairdresser From Hell,” on May 15 of that year, which has garnered over 3 million views. The leggy lass was able to convene over 2.3 million subscribers in less than a year of launching her channel. Not only fame but also she often ran into controversies. In January 2017, she accused fellow YouTuber iDubbbzTV of his frequent use of N-Word and lashed him in her video titled “The N-Word” and in subsequent tweets and live streams.

In response, iDubbbzTV bought a VIP ticket to her show in San Francisco and during the photo session, he went near her and said: “Say, nigger!” He went after her and released a video titled “Content Cop – Tana Mongeau”, a part of his Content Cop series, where he defended himself and accused her of being hypocritical by showing past clips of her uttering the word.

She lost over 100,000 subscribers and a lot of her fans lashed her for her drama. She later posted a video titled “An apology” for the iDubbbz row, in which she stated that iDubbbz was right to call her out on her hypocrisy.

She debuted onto television as herself in the talk series, Shane & Friends, hosted by fellow YouTuber Shane Dawson in 2016. She has also appeared in Escape the Night, Minute Match-Ups and Maury Show.

The stunning YouTuber has an estimated net worth of $4 million, as of 2023. Apart from her successful YouTube career, she also sells her own merchandise.

She was raised in Los Vegas, Nevada. She stated that her childhood wasn’t a pleasant one as her parents often engage in domestic fights.

Tana is good friends with YouTube personalities like Gabbie Hanna and Shane Dawson. She has collaborated with them for a host of videos.

In May 2018, she hosted her own convention called “TanaCon”, which ultimately turned out to be a disaster, and often compared to Fyre Fest. She apologized and issued refunds to the attendees as well.

She is a fan of the rapper Lil Wayne.

Tana began drinking when she was in the 8th grade and by 14, she started smoking weed. She never shies from admitting it.

In 2019, she began starring on her own MTV reality series titled Tana Turns 21.

Her boyfriend Jake Paul gifted her a $124,000 Mercedes G Wagon on her 21st birthday.