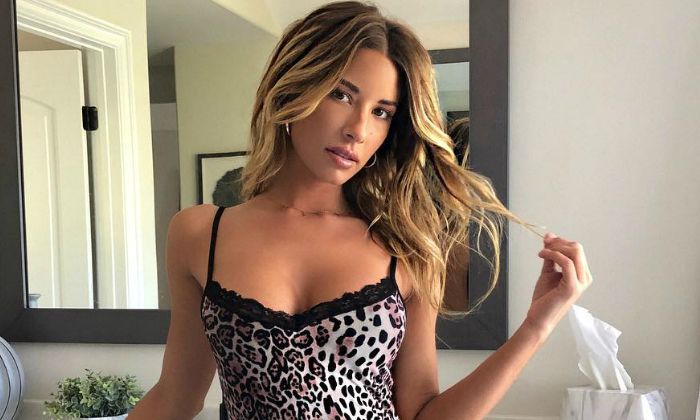 Sierra Skye aka Sierra Egan is a stunningly beautiful blonde from Los Angeles, California probably best known as a swimsuit model and social media influencer. She came into the limelight in early 2015 when she began posting racy pics to her Instagram page, which has already racked up over 4.4 million followers. With perfect curves, especially her minuscule waist, the curvaceous model is taking over the internet by storm for a while now. Having worked with a handful of fashion brands such as PrettyLittleThing, The Hair Shop, Fashion Nova, White Fox Active, MESHKI, Plumeria Swimwear, and ONEONE Swimwear, Sierra Skye is not afraid to flaunt her enviable figure in sexy swimsuits and lingerie. This bludgeoning model is truly a sight to behold and has already shown the world exactly how much talent she has.

Sierra Skye was born on the 6th of November 1995, in Los Angeles, California, United States of America. She is currently 27 years old.

Speaking about her personal life, Sierra Skye has not revealed a lot about her family or her childhood. While not much is known about her parents, including their professions, there are reports citing that she has one sister.

After graduating from high school in 2014, Sierra was admitted to the California State University Channel Islands to study 4-year nursing course, however, she dropped out after two years in order to focus on her modeling career.

Sierra Skye is in a live-in relationship with fellow Instagramer and photographer Roman Palumbo. They developed feelings for each other after a while they met through their mutual friends. He is a professional photographer and had a huge crush on her before they met each other.

They run a YouTube channel together named “Roman & Sierra’s World” and they effectively use it to showcase their life to their fans. They make videos on varied genres including vlogs, travel videos, Q&A’s, shopping hauls, pranks, challenges, and others.

You can catch them on Instagram and YouTube where they post a ton of photos and videos documenting their travel as well as their daily lives.

Having grown up in Los Angeles, Califonia, Sierra Skye developed a liking for fitness and fashion at a very young age. But, at that age, she never thought of making it a career full-time.

During high school, she joined various social media platforms, including Instagram. The very first post that she posted on her Instagram page was apparently a picture of her cat in May 2015.

It was not that easy for her at the very beginning of her online career as she struggled to get the attention of people. It wasn’t long before she met her boyfriend Roman, who helped her get a modeling gig from the swimwear brand Boutine Los Angeles, she gained a lot of followers on the photo-uploading app.

Being a successful swimwear model in the glamor world, Sierra Skye’s career is already quite the success story that inspires a lot of young aspiring women. Besides modeling, she is also a fitness enthusiast and continues to encourage her fans to follow a healthy lifestyle.

There’s no doubt that Sierra Skye is one of the most lucrative bikini models out there who saw plenty of success in the modeling industry. Not only has she amassed an impressive net worth for herself but also inspires other people.

Skye has been affiliated with big names in the bikini industry including the likes of fashion nova and plumeria swimwear. As of 2019, the net worth of this beautiful model is estimated to be $1 million. Having said that, Sierra Skye’s career is quite impressive and she has come a long way from nowhere to most successful bikini model in the industry.

Without a doubt, Sierra Skye is a social media influencer and her social media followers count would speak for it. Like every other model and celebrity, she uses social media to boost her career.

Skye is more popular on Instagram than any of the social media accounts, where she has over 4 million followers. Her Twitter account, @sierra_egan, has over 40 thousand followers.

She is an accomplished dancer and was a part of the competitive team in middle school and high school. She has mastered the craft and is well versed in various dance forms including contemporary, jazz, and ballet.

Skye was a cheerleader in high school.

She is one of the top models in the world who achieved quite a large following on Instagram in a short span of time.

Skye suffers from Brumotactillophobia, which is a fear of food touching other food.

She is currently signed to Elite Model Management.