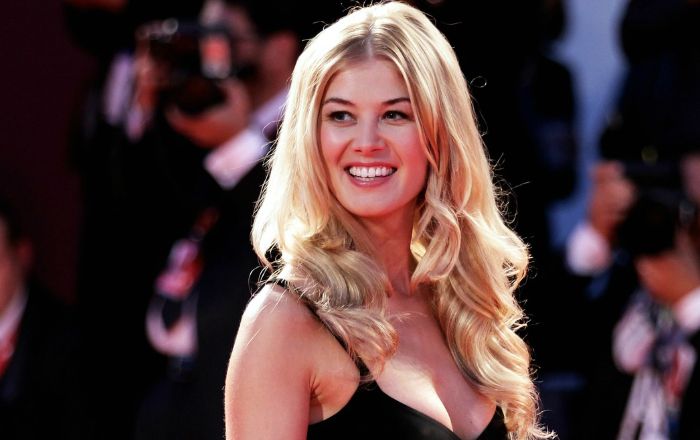 English actress Rosamund Pike, who has starred in several Hollywood hits including The Libertine, Pride & Prejudice, Doom, An Education, and many others. She received international fame and acclaim for starring as Bond girl Miranda Frost in Die Another Day, Helen in the coming-of-age drama An Education, and Lisa Hopkins in Made in Dagenham. Her portrayal of Amy Elliott Dunne in  David Fincher’s Gone Girl earned her international acclaim and won her Academy Award for Best Actress and Golden Globe Award for Best Actress nominations besides other several awards.

During her high school days, she won a scholarship to Badminton School in Bristol. After completing high school, she enrolled at Wadham College, Oxford, from which she graduated with a degree in English Literature.

Rosamund has been dating businessman and mathematical researcher, Robie Uniacke, since 2009. With whom she has two sons named Solo and Atom, both fluent in Mandarin. Robie is almost 20 years older than her.

After acting in a number of stage productions, Rosamund Pike debuted as a supporting actress playing Bond girl Miranda Frost in the James Bond series,  Die Another Day, in 2002.

She first appeared in the BBC serial Wives and Daughters, in which she played the role of Lady Harriet Cumnor.

She has endorsed several brands and products throughout her career including LK Bennett and Revlon.

Whist she was still in college, she began appearing in stage productions like Romeo and Juliet and Skylight. She was then discovered by an agent, who helped her to gain a supporting role in the film Die Another Day, thus embarking on her film career.

Rosamund Pike and Chelsea Clinton, daughter of former U.S. president Bill Clinton, share many similar characteristics like height, and both are good friends with each other.

Rosamund narrated a James Bond audiobook called The Spy Who Loved Me.

In August 2018, Pike, in an interview with the UK’s The Independent, revealed that she was asked to strip to her underwear during an audition for the 2002 James Bond film Die Another Day. Though she declined to strip, she got her part as a double-crossing spy Miranda Frost in the film.