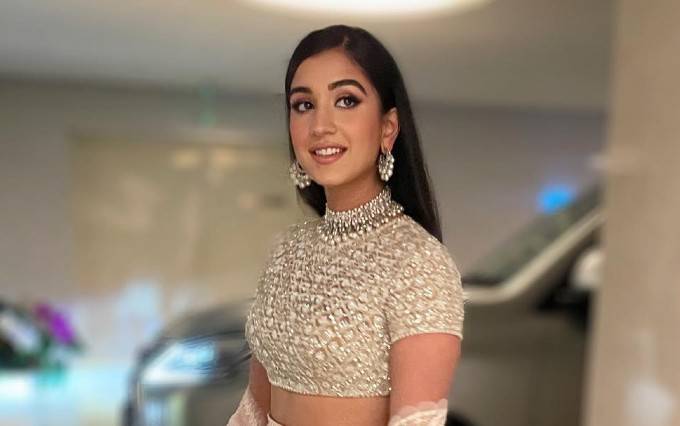 Hailing from Kutch, Gujarat, Radhika Merchant is probably best known for her romantic relationship with Anant Ambani, the younger son of the RIL chairman and India’s wealthiest business tycoon Mukesh Ambani and Nita Ambani. Radhika is the daughter of Encore Healthcare CEO Viren Merchant and Shaila Merchant. She is a trained Bharatnatyam classical dancer who recently had her Arangetram, hosted by Mukesh’s family at the Grand Theatre in Mumbai’s Jio World Centre. She learned Bharatnatyam from the renowned Guru Bhavana Thakar at the Shree Nibha Arts, a Mumbai-based dance academy.

Radhika Merchant is the oldest daughter of Viren Merchant and Shaila Merchant. Her father is the CEO of Encore Healthcare. She has a younger sister named Anjali Merchant.

Radhika attended Cathedral and John Connon School and then Ecole Mondiale World School in Mumbai, Maharashtra. She then graduated from BD Somani International School in Mumbai. After completing high school, she moved to the United States to pursue higher studies where she joined New York University. She earned her bachelor’s degree in politics and economics from the university.

Radhika Merchant has been in a relationship with entrepreneur Anant Ambani for several years now. Anant is the youngest son of Reliance Industries chairperson Mukesh Ambani and his wife Nita Ambani. They know each other since they are young and got engaged sometime in 2019. However, there is no official confirmation about this yet.

As of 2022, Radhika Merchant has an estimated net worth of $5 million. However, her net worth could see an unprecedented rise once she gets married to Anant Ambani.

She learned Bharatnatyam for over eight years from Guru Bhavana Thakar of Shree Nibha Arts. It is a Mumbai-based dance academy with a 25-year history.

Before she began to work for her family business, she worked as a sales executive in a leading real estate firm.

She shares a strong bonding with Nita Ambani and her daughter Isha Ambani.

Radhika’s arangetram ceremony was hosted by Mukesh Ambani and Nita Ambani at Jio World Centre in Mumbai which was attended by the likes of Aamir Khan, Salman Khan, and Ranveer Singh, among many others.