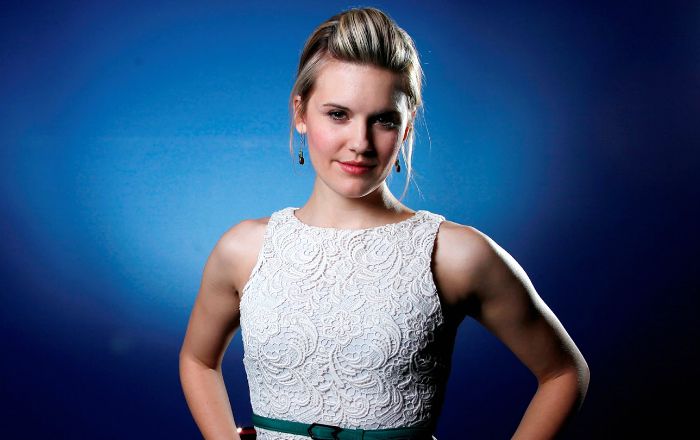 Maggie Grace is an American actress who is best known for her portrayal of Shannon Rutherford on the ABC television series Lost and Kim Mills in the Taken trilogy. She also played Irina in The Twilight Saga films. She received the Young Artist Award nomination for her role as a 15-year-old murder victim Martha Moxley in the television movie Murder in Greenwich. Her other notable acting credits include Murder in Greenwich, The Jane Austen Book Club, Californication, and Fear the Walking Dead.

Maggie Grace was born on the 21st of September 1983, in Worthington, Ohio, United States of America. She’s currently 38 years old.

She is English, German, and Scots-Irish (Northern Irish).

Maggie Grace married her manager Brent Bushnell on May 28, 2017. He is the CEO of an entertainment company. She gave birth to their son in 2020.

Prior, she had a relationship with writer-director, Matthew Cooke. They got engaged in February 2015 after dating for three years. But, the couple broke out in January 2016. She also dated actor Ian Somerhalder from April 2006 to 2007.

Maggie Grace made her acting debut in the 2001 web-based videos series, Rachel’s Room as Rachel Reed. It portrays the affairs inside a teenage girl’s bedroom.

Her first starring role in a feature film was Elizabeth Williams in the 2005 film The Fog.

In 2002, Maggie debuted as Hope Wilde in the TV series Septuplets.

She has appeared in many TV commercials like Dell Dude.

While working on the set of Lost, she adopted a feral cat named Roo, which she found in a dying state. She calls the cat ‘her travel buddy’ now.

She calls herself very clumsy, claiming to “trip over my legs all the time,” and was jokingly nicknamed “Maggie Graceless” by one of her former castmates

In 2005, she was nominated for the Teen Choice Award for her role in the film, Lost.

She credits her mother as her source of inspiration.

Maggie Grace is a self-proclaimed Anglophile, having written to a pen pal in the Lake District from the age of eight, having first visited England at 13 years old.