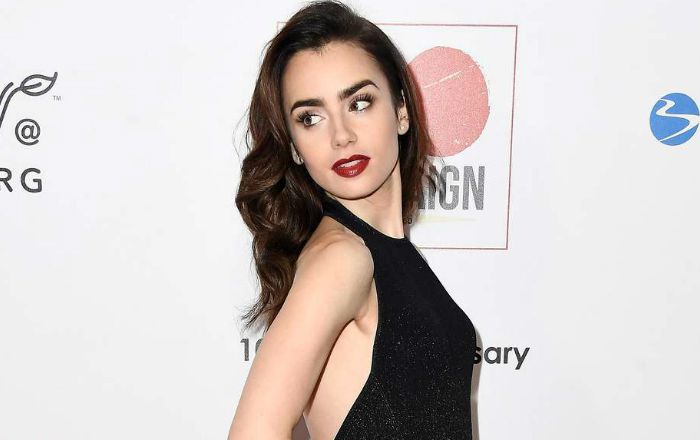 Lily Collins is a British-American actress who has been in the limelight since she was two, thanks to her musician father Phil Collins. She is best recognized for her roles in films like Mirror Mirror, The Blind Side, To the Bone, and Abduction. Collins was nominated for the Teen Choice Award for Choice Movie Actress for her role as Clary Fray in The Mortal Instruments: City of Bones. She also received a Golden Globe Award nomination for her role as Marla Mabrey in the 2016 film Rules Don’t Apply. As of 2023, Lily Collins has a net worth of $25 million.

Lily Collins was born on the 18th of March 1989, in Guildford, Surrey, England, UK. She is currently 33 years old.

Collins graduated from Harvard-Westlake School in LA, California. She enrolled at the University of Southern California, majoring in broadcast journalism.

She has been in a relationship with film director and writer, Charlie McDowell since 2019. The couple got engaged in September 2020 and their marriage followed on September 4, 2021, at Dunton Hot Springs, Colorado.

Lily Collins made her onscreen debut in 2009, playing a small role of Collins Tuohy in the American semi-biographical sports drama film ‘The Blind Side’.

Her first television appearance was as Phoebe Abrams in the CW’s ‘90210’ in the 2 episodes “Zero Tolerance” and “One Party Can Ruin Your Whole Summer”, respectively in 2009.

She earned rave reviews from critics for her role as Marla Mabrey in the romantic comedy-drama ‘Rules Don’t Apply’, which earned her a Golden Globe Award nomination.

Collins has a net worth of $25 million dollars.

She started her acting career at the age of two in the BBC series Growing Pains.

Her parents split when she was five and later she moved with her mother to LA.

As a child, she performed at the Youth Academy for Dramatic Arts.

She was interested in journalism form her young age and she studied journalism at the University of Southern California, but destiny had other ideas for her.

During her college years, she wrote for several magazines like British magazine Elle Girl, Seventeen, Teen Vogue, and the Los Angeles Times.

She modeled for Chanel at the 2007 Bal des débutantes at the Hôtel de Crillon in Paris. The gown that she wore during the ramp was featured on season three of the reality television series The Hills.

In 2008, she was selected as the International Model of the Year by Spain’s Glamour magazine and appeared on its cover in August 2009.

Collins was named as one of the “Hottest Daughters of Rock Stars” by Maxim in 2009.

She won a ‘Pandora Breakthrough Artist Award’ at Glamour’s Women of The Year Awards 2012.

She was originally cast for the movie Evil Dead in 2013 but dropped out due to a scheduling issue. The role later went onto Jane Levy.

In 2013, McAfee named her as the “Most Dangerous Celebrity to Search For Online” because the search results led to risky websites (containing malware, adware, spyware or other viruses).

Collins is an outspoken anti-bullying advocate and is serving as a Celebrity Ambassador to the anti-bullying organization Bystander Revolution.

Collins published her first book, Unfiltered: No Shame, No Regrets, Just Me, in 2017.

In 2017, she won the Golden Globe Awards in the category “Best Actress in a Motion Picture – Comedy or Musical” for her role in the movie Rules Don’t Apply.

In 2021, she received multiple nominations for her outstanding performance in the TV show Emily in Paris, including the Emmy Awards.