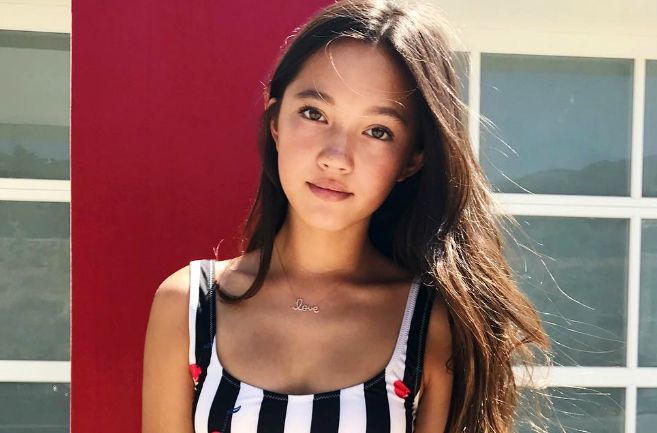 Lily Chee is a young and beautiful American model and actress best known for her work in the television series Daredevil. She has also starred in the 2017 crime-action movie Sunset Park. As an aspiring model, Lily has walked for Petite Parade and Alivia Simone as well as modeled for Target, Old Navy, Nike, and Kohls. She is quite popular on different social media platforms, especially Instagram, where she has accumulated over 450k followers, thanks to her cute, innocent, and amazing personality.

Lily Chee was born on the 19th of September 2003, in Brooklyn, New York, United States of America. She is currently 18 years old.

Lily Chee is the oldest daughter of Rebecca and Max Chee. She has two younger sisters, Mabel Chee, an actress and model, and Nuala Chee, an Instagram star.

She is of Malaysian and Chinese descent on her father’s side, whereas, on her mother’s side, she has Irish and Scottish ancestry.

There’s not much information available regarding her education.

Lily Chee is usually not vocal about her personal life and thus there is not much information available of any relation she has had in the past or in the present.

Her first television role was in the popular Netflix series, Daredevil, where she played young Elektra. Though it was a minor role, she was largely appreciated for her performance. This helped her land a role in her debut feature film.

Her increasing popularity on various social media platforms. She has amassed over 450k followers on Instagram.

Lily’s net worth is estimated at around $200 thousand dollars. She lives in Brooklyn, New York with her family.

She was discovered by a talent scout at the age of 9 years old while she was shopping with her father.

She immediately signed with the agency and instantly gained fame as a model. She has walked the ramp at Petite Parade Fashion Show and has worked with popular designers like Alivia Simone.

She has a self-titled YouTube channel, where she posts videos on a skincare routine, makeup routine, sister tags, and challenge videos. Her most popular videos across the platform are “Everyday Makeup Routine,” “My Nighttime Routine,” and “2018 January Favorites.”

She holds dual citizenship in America and Canada.

Lily studied ballet and hip-hop while she was young.

She enjoys traveling and playing soccer. She is often accompanied by her sisters and her father on her travels. She also posts lots of pictures and videos from her traveling on Instagram and YouTube.