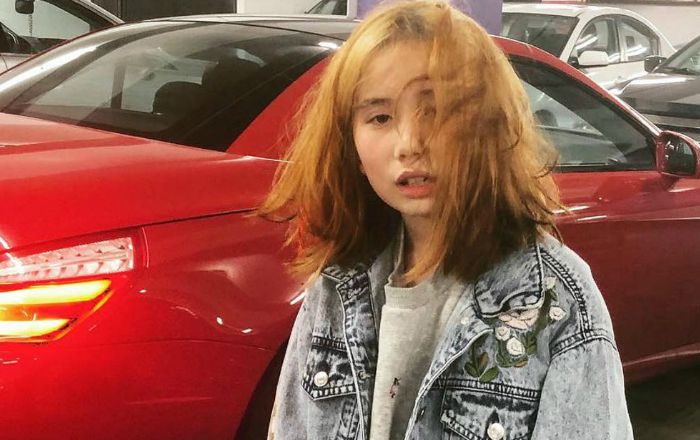 Lil Tay is a nine-year-old American Instagram star and hip hop artist who took the internet by storm when she got herself indulged in the brawl between internet personalities Woah Vicky and Danielle Bregoli aka Bhad Bhabie. The notorious young girl is known for her foul-mouthed online posts (especially those N – and F-bombs and casually calls people bitches) to trash her haters and throwing around some big bucks in her videos. She claims herself as the “youngest flexer of the country.” She is currently the most wanted kid in the hip-hop world with mysteries surrounding her only seem to mount. The young tad has a verified Instagram account with more than 743K followers (that’s bizarre, she’s only 9, but the photo-sharing requires everyone to be at least 13 years old to have an account).

Her real name remains to be a mystery. She changes her name on Instagram now and then. Previously, she called herself Lil Tay Jetski (Lil Pump’s popular moniker), then Lil Tay Cosgrove (after Miranda Cosgrove) and then went by Lil Tay Tervali. Now, she has changed her name again and is now going by Lil Gucci Taylor.

Lil is too young to have a boyfriend.

Her body stats may be –

Lil Tay hasn’t acted in any film or TV show yet.

There is no information about her net worth available at this time.

Her social accounts have been taken down several times due to her talking trash.

The young girl has been in the scene for around one or two years now. She posts videos and pictures on YouTube and Instagram that generally flaunt her riches and talking reckless.

She proclaims herself a youngest millionaire.

She was spotted around with rapper Chief Keef multiple times and alleges that the two are working together on a music video.

In April 2018, she was caught involved in a fight between viral star turned rapper Bhad Bhabie and fellow viral star, Whoa Vicky. Followers of these Instagram stars know that Vicky and Bregoli have had a cold war going on between them for some time now. After that incident, everyone who watched the video has turned their attention to Lil Tay.

To those who are wondering if Lil Tay and Miranda Cosgrove are siblings? The answer is no. The real mystery is why she calls herself Lil Tay Cosgrove? It is because that she is a big of Lip Pump, the boyfriend of Cosgrove? Previously, Lil’s Instagram stated that her Instagram account was managed by Miranda Cosgrove, which she has recently changed it to ” account managed by Gucci Gang “