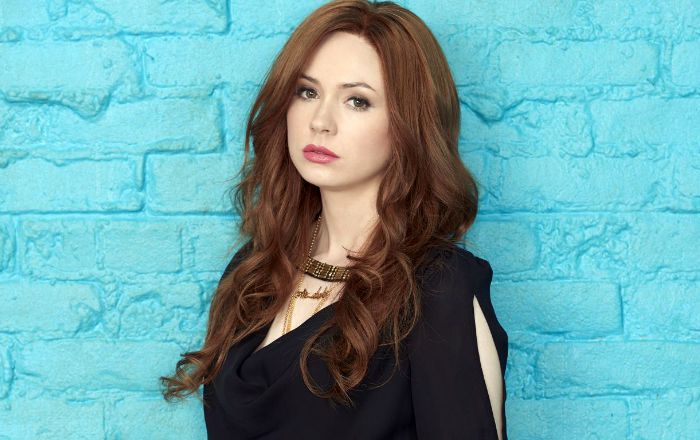 Karen Gillan is a Scottish actress, model and filmmaker who gained a lot of fame and popularity for her role as Amy Pond in the BBC One science fiction series Doctor Who. She played Nebula in Marvel’s Guardians of the Galaxy films and will reprise the role in their upcoming films as well. She also starred as Ruby Roundhouse in Jumanji: Welcome to the Jungle.

Karen Gillan attended Telford College in Edinburgh where she did her HNC Acting and Performance course. She later moved to London where she enrolled at the drama school, Italia Conti Academy of Theatre Arts to study acting.

Karen started dating British photographer Patrick Green back in 2006. The couple broke out in 2012 after living together for about six years.

After that, she dated British producer Andrew Brooke in late 2012. They called off their relationship in 2013.

Gillan had her first onscreen appearance in 2010 in the film Outcast, playing the role of Ally.

In 2006, Karen Gillan made her television debut appearing in an episode of the TV show Rebus. She played the role of Teri Cotter in an episode titled ‘A Question of Blood’.

She has more than 20 credits as an actor for appearances in TV shows like The Kevin Bishop Show, Doctor Who, Doctor Who Confidential, and NTSF:SD:SUV, to name a few.

Her first directorial venture was The Party’s Just Beginning which also saw her playing the role of Liusaidh.

In 2011, Gillan made her off-Broadway debut in John Osborne’s play Inadmissible Evidence along with Douglas Hodge, playing the role of Shirley. She made her Broadway debut in a play called Time to Act in November 2013.

For her starring role as Nebula in the Guardians of the Galaxy films.

Having played the role of Amy Pond who is a companion of the protagonist Matt Smith (the Doctor) in the TV series Doctor Who from 2010 until 2012.

Gillan is credited for voice role  on TV commercials including Royal Bank of Scotland (RBS), Warburtons, eHarmony and others.

Karen has an estimated net worth of $2 million.

During her college years, she did modeling but was focused on her dreams of becoming an actor. She once stated that she would never give up acting for modeling.

She was initially cast for guest roles on television drama series before landing a main role on  sketch comedy series The Kevin Bishop Show.

In 2010, she won the Young Scot Awards in Entertainment category for her appearance as Amy Pond in the TV series, Doctor Who.She also won several other awards for her role in the series.

She is a good friend of Katee Sackhoff.

Gillam had her head shaved for her role as Nebula in the Marvel superhero science fiction film Guardians of the Galaxy.

Gillan wrote and directed her first short film, Coward, which screened at the 2015 Edinburgh Film Festival, and nominated for several awards.

In 2018, She was cast as Ruby Roundhouse in Jumanji: Welcome to the Jungle, starring alongside Dwayne Johnson, Kevin Hart, Jack Black and Nick Jonas.

In 2018, she released her first featured film as a writer and director, titled The Party’s Just Beginning.